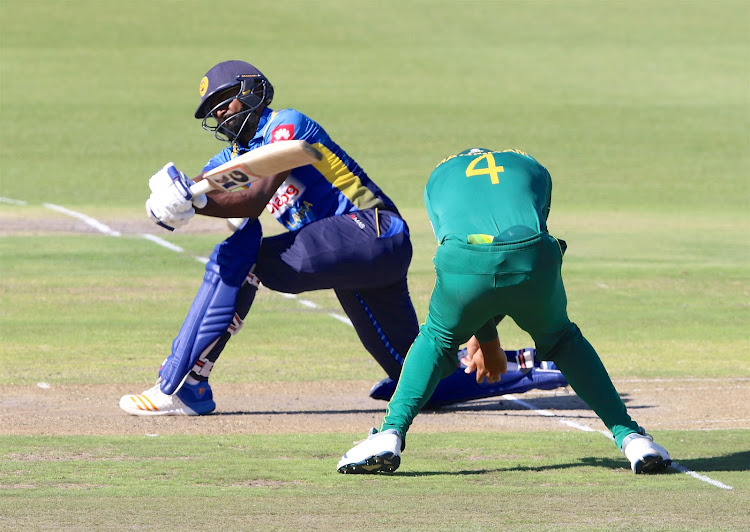 Tailender Isuru Udana clubbed a half-century to help Sri Lanka reach 189 all out in the fourth one-day international at St George's Park in Port Elizabeth on Wednesday.

Batting at number nine in the order‚ Udana smashed 78 off only 57 balls to somewhat rescue the visitors' innings from 131 for nine.

He hit seven fours and four sixes and shared a Sri Lanka record 58-runs for the last wicket with Kasun Rajitha‚ who finished on nought not out.

Proteas speedster Anrich Nortje was the most successful of the bowlers taking three wickets.

After being put into bat by Proteas captain Faf du Plessis‚ Sri Lanka were cavalier in their approach losing regular wickets throughout the early part of their innings.

Warriors fast man Nortje took three of the first six wickets to fall to return the best ODI figures of his short career so far. He finished with three for 57 in eight overs‚ going for 23 runs in his seventh.

Udana got stuck into him striking the first three balls of the over for six. The remainder of the wickets were shared by the bowlers.

Dale Steyn made a return to the team and made the initial breakthrough removing Upul Tharanga for just four after the opener skied a catch to Tabraiz Shamsi at mid-on.

Lungi Ngidi claimed the second wicket having Oshada Fernando caught by Reeza Hendricks at first slip for a duck.

And Sri Lanka were 51 for four when Nortje removed Avishka Fernando (29) and debutant Priyamal Perera (0) with consecutive deliveries.

Nortje then forced an edge out of Kamindu Mendis (9) through to wicketkeeper Quinton de Kock‚ who pouched an easy catch.

Andile Phehlukwayo got in on the act removing dangerman Kusal Mendis for 21‚ caught by Nortje‚ who remained in the thick of the action.

That had Sri Lanka reeling at 71 for six and Dhananjaya de Silva and Thisara Perera attempted to resurrect the innings.

They could only do so for 28 runs before Perera presented Tabraiz Shamsi with a simple caught and bowled opportunity which the unorthodox leftarm spinner gleefully accepted.

De Silva added 22 in the middle of the innings.

South Africa have an unassailable 3-0 lead in the five-match series.

Amla out‚ Hendricks in for last two ODIs

Hashim Amla has been withdrawn for the last two one-day internationals against Sri Lanka‚ a development that is set to strengthen Reeza Hendricks’ ...
Sport
2 years ago

In-form Aiden Markram will look to make the most of his 11th hour chance when South Africa face Sri Lanka in the fourth Momentum one-day ...
Sport
2 years ago

Just days ago Quinton de Kock lamented not turning sturdy scores into centuries in recent innings, but he remedied the situation emphatically at ...
Sport
2 years ago