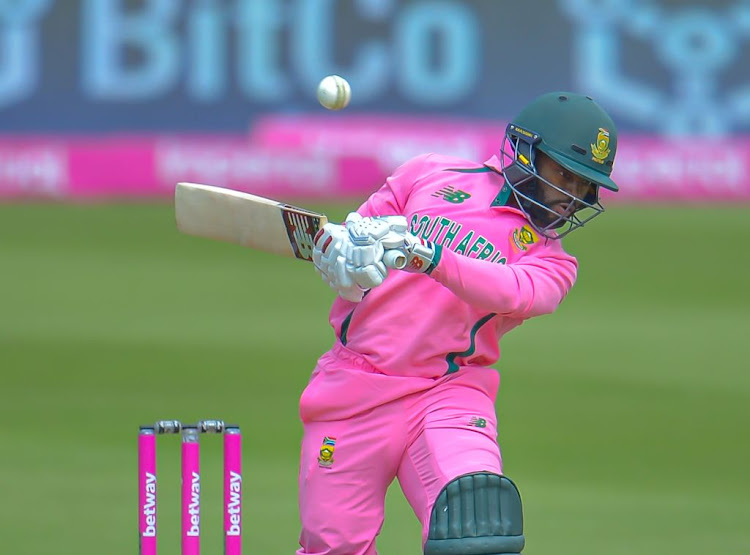 SA captain Temba Bavuma ducks under a high ball during the 2nd ODI against Pakistan at the Wanderers Stadium in Johannesburg on Sunday
Image: Gordon Arons/Gallo Images

After a measured start SA captain Temba Bavuma helped power his team to 341/6 in their Pink Day ODI against Pakistan on Sunday.

Bavuma with 92 off 102 balls was the mainstay of the innings with telling contributions too from Quinton de Kock (80), Rassie van der Dussen (60) and David Miller (50 not out).

While De Kock helped set the foundation and Van der Dussen and Miller towering spikes in the Manhattan graph of the innings, it was Bavuma that ultimately gave the SA effort its lofty dimensions.

He had lost the toss for the second consecutive time and on a wicket that featured a generous number of cracks the South Africans initially went about their business with an abundance of caution.

They were after all trying to avoid a hat-trick of defeats in Pink Day contests, and they had the rather pressing consideration of keeping the series alive after going down in the first ODI in Centurion on Friday.

Markram notched up the first boundary when he rocked onto the back foot and slapped a Shaheen Afridi delivery over point for four to bring the opening over to a close.

His pull off Muhammad Hasnain for six was one of raging authority that ended the fourth over.

After playing a lavish cover drive he was dropped on 31 by keeper Muhammad Rizwan who launched himself in front of first slip.

He then hit Faheem Ashraf for a disdainful six over extra cover which truly warranted him keeping his pose at the end of the stroke for the photographers. Whether he kept his composure is another matter for he smashed the next ball into the covers only to be caught for 39 off 34 deliveries.

He again played himself in and got out.

As the occasion demanded at the time, De Kock went about his business cautiously accumulating 16 off 31 deliveries before he hooked Haris Rauf into the Kent Park Taverners Stand.

De Kock took more than an hour and a half to reach 50. To be fair, he did not have the bulk of the strike and had faced 60 deliveries when he reached the mark.

His well-crafted innings was characterised by self restraint.

The innings however got some impetus when Van der Dussen and Bavuma joined forces. The pair fashioned a partnership high on urgency and inventiveness compiling 101 off 69 deliveries.

Van der Dussen who strode to the crease with an average of 83 from his first 22 ODI's looked in touch and in the mood from the outset.

His timing was crisp and his placement immaculate as the SA innings got the momentum that elevated it from the realm of good to imposing.

The point was underlined by some lusty blows from Miller who reached his 50 off 27 deliveries.

India batting great Sachin Tendulkar said on Friday he has been admitted to hospital as a precautionary measure after contracting the novel ...
Sport
3 months ago

Pink Day has provided many enthralling moments at the Bullring

For sheer sensory extravagance there is little in the world of cricket that matches a Pink Day ODI at a packed Wanderers.
Sport
3 months ago

A maiden career century by Rassie van der Dussen was overshadowed by Babar Azam’s commanding ton as Pakistan beat the Proteas by three wickets in the ...
Sport
3 months ago