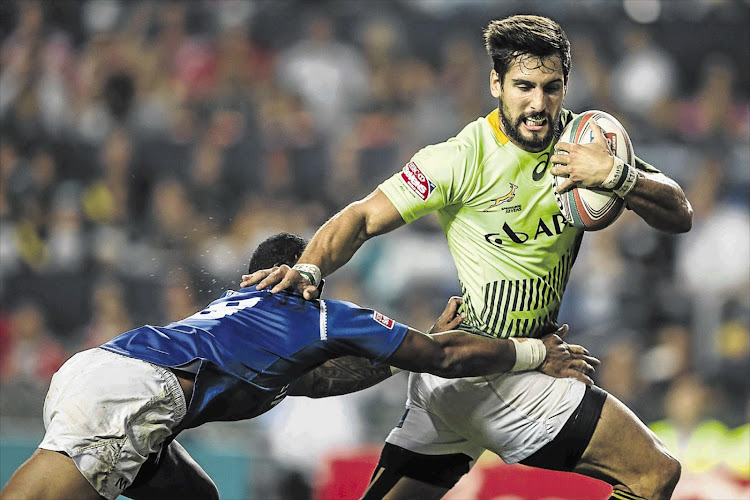 BLITS BLOCK: Stephan Dippenaar of South Africa in action against Samoa during the third-place game in the Hong Kong Sevens yesterday. The Blitzbokke won the game 26-5 and retained their overall lead in the HSBC World Series
Image: GETTY IMAGES

Blitzboks coach Neil Powell has promised that his side will reset their focus when they run out at the Singapore leg of the HSBC World Seven Series this weekend.

The Blitzboks still lead the World Series by three-points over Fiji with three rounds of the season to play.

But after missing out on a medal at the Commonwealth Games on the Gold Coast 10 days ago (which wasn’t a World Series tournament)‚ Powell believes he has identified how and why his side fell short at the four-yearly event.

“We have closed the door on the Commonwealth Games and are fully focused on our first game in Singapore against Samoa‚ because it is going to be a tough one‚” Powell said.

“I don’t want to become too focused on finishing above Fiji this weekend.

“The problem we identified after the Commonwealth Games was that we had become too results focused and moved away from being process-driven. That put unnecessary pressure on the team.

“If we go into the Singapore with the same mindset of worrying about beating Fiji‚ we are not concentrating on our processes.

“We just want to go out and play like we usually do‚ which is to look after our system‚ implement our processes and put in the effort. When we do that‚ the results usually take care of themselves.”

Powell believes that the poor result in Australia has refocused minds in the squad as they attempt to wrestle momentum from Fiji‚ who have won three of the last four World Series events to close in on SA at the top of the standings.

Three weeks ago‚ the Blitzboks sent a second string team to the Hong Kong Sevens and came third‚ losing 26-24 to Fiji in the semi-finals. As a result six of those players have forced their way into the squad in Singapore this week.

“As a coach and as players‚ if you get to a point where we feel you know everything and can stop learning‚ then you will be in trouble‚” Powell said.

“We have learnt lessons from the Gold Coast and sometimes you need a bad tournament to make you realise that you have shifted focus from what works.

“An under-par performance doesn’t make us a bad team‚ me a bad coach‚ or the players bad players. We just have to realign our focus.”