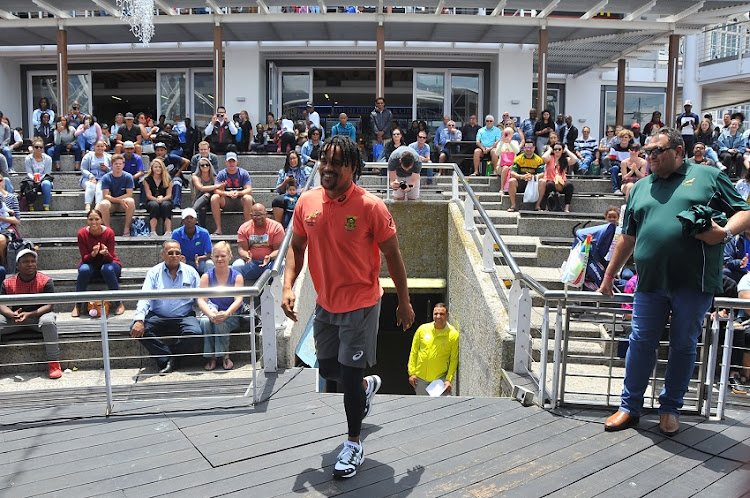 The Blitzboks scored 20 unanswered points in the second half of a dramatic Singapore Sevens final to beat Fiji 20-19 and secure their second win of the season.

A last minute penalty by Selvyn Davids sealed a dramatic comeback to add to SA’s Vancouver title earlier in the season. Victory cemented their place in the top four on the standings.

SA are now on 121 log points‚ 14 clear of fifth-placed England in a race for the an automatic Olympic qualification place.

The Blitzboks were in top form all weekend‚ winning six out of six matches but it looked like their 100% record was to be undone by Fiji‚ who ran into a 19-0 halftime lead in the final.

The islanders overpowered the Blitzboks at the breakdown while SA were guilty of missing several tackles as well.

After halftime though the Blitzboks managed to secure some possession with the impressive Werner Kok setting the tone with more big tackles and effective breakdown work.

Although the conversion was unsuccessful the momentum of the match switched and from the restart Fiji were under pressure again.

Kok won a breakdown penalty and the exciting Angelo Davids eventually scored after running on to a perfectly weighted kick-pass from Justin Geduld.

He was late tackled after scoring and Fiji were given a yellow card.

It was a crucial moment in the match and with the numerical advantage the Blitzboks manipulated space and numbers too allow Ryan Oosthuizen to score to draw SA to two points of the lead.

With less than a minute on the clock and Fiji under pressure close to their own line again‚ the Blitzboks earned a penalty.

Davids landed it to put SA in front for the first time in the match.

But there was still a restart to come and Fiji secured possession and tried to find space out wide. Inexplicably they kicked ahead but Davids was sweeping for the Blitzboks.

He collected and hoofed the ball out to give SA a famous win and their second victory over Fiji in Singapore after beating them 17-7 in a Pool match.

Springbok Sevens coach Neil Powell was full of praise for his squad‚ who started the final without their injured captain‚ Siviwe Soyizwapi.

“It was a gutsy performance‚” said Powell.

“They really never gave up. We spoke at halftime about the importance of scoring first after the break and that happened and the guys kept on playing.

“It was important that we held onto the ball in that second half. The young players are really coachable and listened to all the advice and instructions and it worked out for us in the end.

"They did score first‚ although only after two minutes‚ but that gave the belief the needed momentum. I am almost speechless on how they pulled this one back.”

Powell said his team struggled in the first halves of their matches at the tournament‚ but played very well after the break: “We were often our own worst enemies‚ but once we got things going‚ we really played well.”

The disappointment of finishing seventh in Hong Kong is now behind them.

“It was tough this week‚ the guys were down after the disappointing show there. Their comeback makes me very proud‚” said Powell‚ who also praised his management.

“We needed to make sure the guys had energy this weekend and changed our approach to achieve that. It worked well and I need to compliment the management for their roles in getting the guys ready to go again.”

Soyizwapi‚ who missed the final due to a knee injury‚ said it was hard to describe the emotions after their amazing comeback.

“They guys kept on believing in our structure and by doing so‚ their natural abilities came to the fore. They expressed themselves. I kept believing – this is what we were working for. It was incredible.

“The newer guys learned so much‚ but they also gave so much effort. We will all be better because of this experience.”

Earlier the Blitzboks won their quarterfinal 21-12 against Samoa before beating World Series leaders the USA 24-12 in the semi-final.