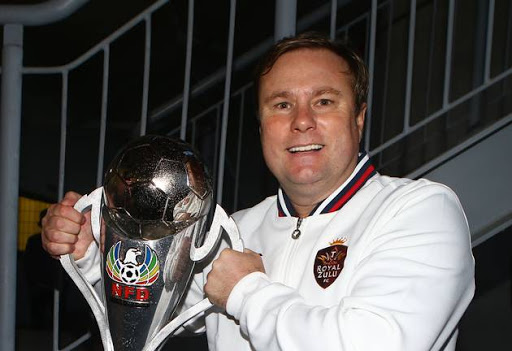 AmaZulu will return to the Premier Division through their financial muscle and Thanda Royal Zulu’s desperation.

But that deal is subject to the approval of the Premier Soccer League (PSL).

Usuthu have been trying to gain promotion to the elite league on the pitch and in the boardroom since their relegation in 2015.

The Durban outfit tried to buy the status of Mpumalanga Black Aces but the terms of the purchase saw the deal fell through.

They brought Zimbabwean coach with CAF Champions League experience‚ Joey Antipas‚ at the start of the 2016/17 season to help them achieve their objectives on the field.

But the club fell short of finishing in the top three‚ as second and third placed teams fight it out in the play-offs with the team that finished 15th in the elite league.

The club’s chairman Pierre Delvaux said he would be forced to sell the club if they don’t get enough financial support to compete in the Premier Division.

“People have to realise that it’s Thanda Royal Zulu’s chairman‚ Pierre Delvaux‚ who initially came out to talk about the club being for sale‚" AmaZulu’s spokesman Brilliant Mkhathani said.

"We never said we were in the market to buy the status of any club.

“They’ve been speaking about a lack of sponsors that they needed to intervene so that the club can be competitive in the PSL.

That hasn’t happened. There have been talks (between AmaZulu and Thanda) but it’s not a done deal. The rest is up to the PSL.”

The news of this sale has been met with anger by the city of uMhlathuze.

The mayor Mdu Mhlongo‚ who was among the first people to congratulate Thanda on their promotion‚ called on the PSL to block this sale.

“The City of uMhlathuze strongly condemns the alleged move by Thanda Royal Zulu’s chairman to sell the club to AmaZulu FC‚” a statement by the municipality said.

“The City urges the PSL Board not to approve this deal as it is a daylight robbery for soccer fans in the northern part of KwaZulu-Natal.

"The City is disappointed at the recent media reports citing the negotiations between AmaZulu FC and Thanda Chairman Mr Pierre Delvaux‚ to sell his club’s Absa Premiership status without the consideration of the supporter’s hearts.

“The City of uMhlathuze has‚ for years‚ invested millions of rands to the club as main sponsors with the intention of seeing the club developing to the top league.

"City people and soccer lovers invested their hearts when the club was struggling and supported with all they had until the glory days.

"Tax payers money were also invested in improving the stadium to accommodate the club’s success and just recently‚ R14 million worth of FIFA accredited stadium lights were installed.

"More improvements are underway (and they are) worth millions of rands‚ which will go down the drain if the allegations are proven to be factual.

"The City of uMhlathuze will fight with all it can within its powers to stop the transaction and ensure that Thanda Royal Zulu remains the pride of the people of the northern part of KwaZulu-Natal."

"Thanda Royal Zulu are bound by a three years’ Service Level Agreement (SLA) with the City of uMhlathuze of which will be activated to prevent any unfavourable transactions.”