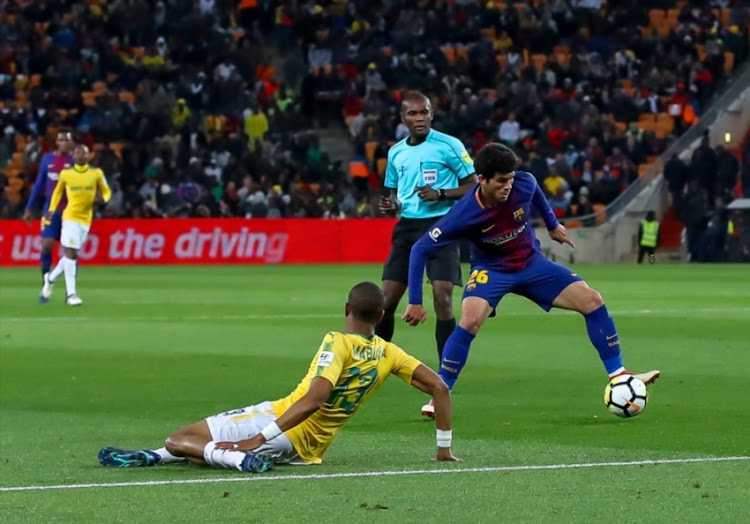 Tiyani Mabunda of Mamelodi Sundowns misses the cross ball which allowed Louis Suárez of Barcelona to score the second goal during the friendly match between Mamelodi Sundowns and Barcelona FC at the FNB Stadium on Wednesday.
Image: Gordon Arons/Gallo Images

Mamelodi Sundowns were the butt of jokes on Twitter on Wednesday night after they failed to beat Spanish giants FC Barcelona who had arrived in the country about 10 hours earlier.

In a match that undoubtedly showed the gulf in class between the two teams, Barcelona beat Mamelodi Sundowns 3-1 in front of a packed and lively FNB Stadium to win the Nelson Mandela Centenary Cup.

After the match, Barcelona flew out of the country immediately to continue with preparations for their last La Liga match of the season against Real Sociedad on Sunday at the Camp Nou.

Here is a match to look foward to. #SundownsBarça pic.twitter.com/Sv78Anvl2P

Barcelona arrived in the country in the morning after a long haul flight from Spain and did not even have time to train before this match, but they were too strong for the PSL champions on a bitterly cold Johannesburg night.

I can already hear Pitso blaming the bus strike for this loss... pic.twitter.com/cPGd113DkR

#SundownsBarça jet-lagged Barca is having Chicken-ala-Sundowns stew for supper. That's a refreshing supper after travelling for 14 hours if you ask me. 😂😂 pic.twitter.com/RYRYaudrEj

EFF leadership in attendance at the #SundownsBarça march this evening at the FNB Stadium. pic.twitter.com/mGPKW3epd5