TONY LEON | Buckle up. The post-ANC ride will be bumpy

The ANC may have been punished, but it’s still powerful as the rising parties jostle for position in a new political order 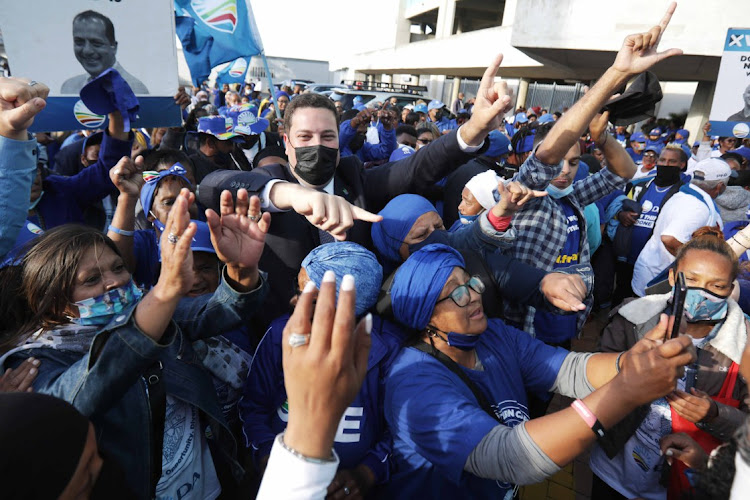 Alongside the fading light of Eskom, the refulgent blaze of the ANC’s electoral comet shines far less brightly since last Monday.

That, at least, is the one takeaway from the outcome of the local polls of 2021. In ancient Rome, the Etruscans were highly regarded for their ability for reading “auspices”, like blazing comets, and discerning supernatural markers of the future revealed through the flights of vultures and the dietary habits of chickens.

There is a clutch of modern South African auguries which suggest bad times arising ahead for both the once impregnable ruling party and an exhausted and fed-up citizenry, shivering literally in the darkness: there are the rolling blackouts everywhere. The derailing of the prestigious Blue Train at Germiston on Saturday is rich in metaphorical suggestion of the pitiless and predatory sacking of infrastructure and expertise. Perhaps only the Springbok win against Wales at the weekend offers a shaft of light in the gloomy skies above.

The ANC hitherto has been a hegemon of a special sort — dominating almost the entirety of our polity and commanding ever more of our diminishing economy and intruding itself into our cultural life. It claimed not only a political majority but a moral one.

The modern chronicler of Roman era, Tom Holland, provides us with a reminder that the modern concept of “authority” stems from the Latin word “auctoritas”. This, he tells readers in his rollicking book on the rise and fall of the house of Caesar, Dynasty (not to be confused with the soapie), is “the ineffable quality of prestige that served the Roman people as a measure of greatness”.

The outcome of last week’s election certainly dented severely the authority of the ANC on any objective measure. It recorded, as has been well-chronicled, its worst result in any of 12 national and local elections since 1994; it dipped below 50% for the first time since the advent of democracy; it lost over 900 councillors and control of every large metro council; and its majority is only assured in rural areas, with the standout exception of KwaZulu-Natal. Just a third of the total pool of possible voters bothered to vote. Some, perhaps many, of them believe now in the old warning of American anarchist Emma Goldman that “if voting changed anything, they would make it illegal”.

Indeed, in the Zulu heartland, the party’s previous electoral banker, its old nemesis the IFP defied its obituary writers: in a storming electoral comeback the IFP won a brace of municipalities in both Zululand and Northern KZN, not least the second most important industrial provincial hub at Richards Bay. Even in Harry Gwala’s old redoubt of Pietermaritzburg (Msunduzi) — ransacked and asset-stripped by thieving ANC councils — the ruling party was brought low, winning less than 50%.

The DA’s electoral get out of jail card also came from close to Maritzburg. After 20 years of grinding effort, commenced in 2000 by the party’s election mastermind and Howick resident Greg Krumbock, the party last week for the first time won control of the uMngeni local authority (Howick, Hilton and surrounds). Its telegenic young mayor, Chris Pappas, was described to me by a sage political economist who originates from the higher reaches of the ANC as an electoral weather maker: “That young man in Howick was able to cross barriers by not just speaking Zulu, but he understands its embedded cultural idiom and values. That is why the media is right to call him a white Zulu. Johnny Clegg was like young Chris Pappas.”

In the Cape Town metro, where after 15 years of uninterrupted power the DA stands unchallenged but slightly reduced, its new 33-year-old mayor, Geordin Hill-Lewis, enters office as the youngest mayor in the history of the Mother City. His exceptional qualities also suggest he might prove one of its best. So, in two different places, in rural KZN and in the urban Cape, the party provides some exciting faces for the future.

If both it and the EFF did not advance in these elections, the DA, at least, has the consolations of governing a belt of 13 municipalities alone in four provinces and possibly as the lead party in others, where it won a plurality, but not a majority.

The DA, to be sure, faces many future challenges. Its electoral base, battered by recent leadership churn and facing undimmed challenges on its traditional right (the FF+), declining support in its previous heartland of Gauteng and an erosion in the Western Cape rural areas, still stands. And if both it and the EFF did not advance in these elections, the DA, at least, has the consolations of governing a belt of 13 municipalities alone in four provinces and possibly as the lead party in others, where it won a plurality, but not a majority.

Indeed, hung councils, or those with no outright winner, are now the new order across 66 municipalities, including in the Gauteng industrial heartland. Welcome to Coalition Country, the prescient title of a 2018 book by academic turned DA MP Dr Leon Schreiber. Its subtitle “South Africa after the ANC” might just prove Schreiber to be an augur of the modern sort.

For the EFF there are few consolations: the dire economic country conditions, the pitiless and predatory behaviour of ANC mayors and municipal managers across the country, the misery and undignified lives of the poorest majority seemed tailor made for exploitation by the ruthless populism peddled by the red berets. Yet despite five years of continued misgovernance by the ANC at local and national level, sky-high unemployment and embedded corruption, the EFF barely inched forward (from 8.2% to 10.4%). In the places where the majority live, and on whose name the EFF proclaims, the EFF produced pedestrian outcomes: in the eight metros — which cover the bulk of our population — the EFF did not advance from its third-place finish of five years ago. And in the most important one of all, Johannesburg, it lost even the bronze medal it got in 2016 to Herman Mashaba’s fast-rising party ActionSA.

ActionSA’s debut performance was impressive, certainly in Johannesburg, though less so in the other limited number of municipalities it contested. But even in his hometown, his 16% results place him very far from the mayoral podium around which his campaign was based. He has ruled out in the most explicit terms any deal of any sort with the ANC. His far more natural partner in a coalition is obviously the DA. But a visceral hostility towards his former party was evident in his initial statements about a possible coalition deal.

Mashaba complained about “DA arrogance”, “DA must not waste our time” and even berated his former party for not telephoning ActionSA timeously. He also faulted the DA, after its outreach to ActionSA, for not waiting for Mashaba’s negotiators to all be present last Friday. It’s all a little reminiscent of the 1968 Paris peace talks between the US and North Vietnam. The initial rows were about the shape and size of the table in the negotiating room. The war continued for another seven years. Whether hard pressed residents of Joburg have much interest in all this is open to doubt. Results matter not just in elections but in negotiated outcomes too.

More than ancient Rome or even reading SA’s electoral tealeaves from last week, aided hugely by our two ace psephologists Dawie Scholtz and Wayne Sussman, there is another perhaps more hopeful outcome from the inconclusive results of last week, given that every major city bar Cape Town has no idea who its mayor will be and in what combination a ruling administration will assemble.

The Italian Marxist philosopher Antonio Gramsci coined the concept of “hegemony”, or how the state uses its dominant ideology to maintain its grip on power and the status quo. The ANC hitherto had been a hegemon of a special sort — dominating almost the entirety of our polity, commanding ever more of our diminishing economy and intruding itself into our cultural life. It claimed not only a political majority but a moral one.

A few years ago, it would have been inconceivable that every major party outside the ANC would not contemplate ever entering a coalition with the hegemon to divide up the municipal spoils. Or that the third party, itself a tributary flowing from the ANC river, the EFF, would so contemplate, but then would produce a list of impossible demands, rendering even that prospect remote if not moot. So, the essential dance partner at every political wedding to date is now something of a rejected wallflower.

This certainly does not mean you can write off the ANC. It still has the majority support, grudging and abstaining as it might be currently, and it might finally learn some lessons from its current electoral humiliation.

However, the exciting outcome from last week is that nothing now is certain and settled, and electoral inevitability is no longer the ANC birthright. Tighten your seat belts.