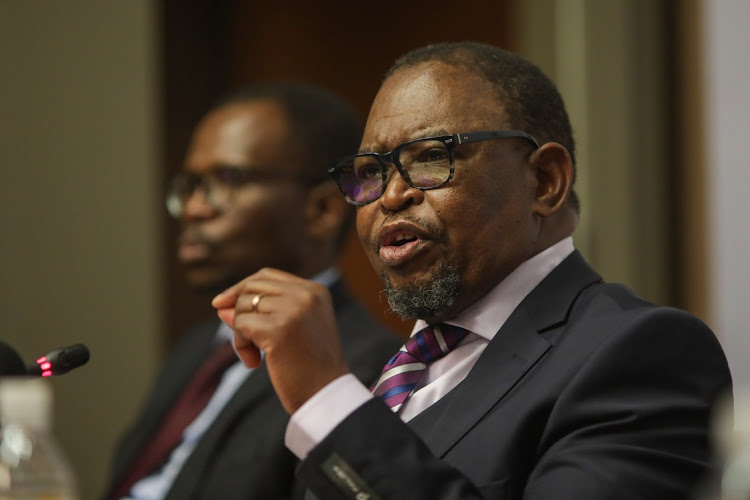 A R182bn tax windfall boosted by a commodity boom has resulted in a slight improvement in public finances, giving the government room to reduce borrowing, narrow the budget deficit, extend social grants and invest in job creating projects.

A buoyant National Treasury described returning public finances to a healthier position as a great milestone, but finance minister Enoch Godongwana warned in his speech the country is still a long way from a more sustainable economic recovery and that spending must still be curbed.

“The improved revenue performance is not a reflection of an improvement in the capacity of our economy. As such, we cannot plan permanent expenditure on the basis of short-term increases in commodity prices. To be clear, any permanent increases in spending should be financed in a way that does worsen the fiscal deficit,” he said.

Government's debt adjusted for inflation is equivalent to R69,291 for every person in the country

The government collected R182bn more in tax revenue over the past 12 months than anticipated in last year’s budget. It plans to use the windfall to extend the Covid-19 relief of distress grant by another 12 months at a cost of R44bn, and in support of job creation projects.

The Treasury has consistently warned that the cost of serving this debt is astronomical and eats into funds that should be spent on education, health and social services.

Debt service costs have also shot up to R333.4bn, meaning SA will pay a staggering R1-trillion over the next three years in interest to local and international bondholders.

“In 2008/9, public debt adjusted for inflation was equivalent to R22,869 for every person living in SA. it has since tripled to R69,291 for every person in the country. Over the same period, real interest costs of this debt rose from R1,984 per to R4,278 per person per year,” The Treasury explained in its Budget Review document.

It has been on an aggressive fiscal consolidation drive which involves cutting public spending, reducing debt and directing funds towards activities that stimulate the economy such as expenditure on public infrastructure.

The government has set its sight specifically on the public sector wage bill which now accounts for 35% of all expenditure.

The government forced public servants to accept increases below inflation and refused to honour the last leg of a costly three years wage agreement signed in 2018. Labour unions have gone to the Constitutional Court to appeal against a labour court ruling that found in favour of the government in the dispute.

With the next round of salary negotiations beginning next month, the Treasury cautioned that should the government be forced to increase public servants’ salaries by higher than budgeted amounts as a result of union pressure, the state will have to retrench some of them.

“Should collective bargaining result in salary adjustments that exceed compensation ceilings, reductions in headcount will be required.”

The government will spend more than R2-trillion this financial year, with over half of that amount — R1.3-trillion — towards social education, health, social and community development.

Learning and culture receives the biggest slice at R443bn. Of this amount, R282bn goes to basic education and R46bn is allocated to the National Student Financial Aid Scheme to fund free higher education for students whose families’ combined annual income is under R350,000.

Social development is allocated R346bn, the bulk of which towards paying a myriad of grants.

The National Treasury has now allayed fears it would increase taxes to fund a basic income grant. The ANC, labour and civil society organisations have been demanding the introduction of the grant as a cushion for millions of people pushed into poverty by Covid-19 and a depressed economy. The Treasury said it will not consider any permanent social grants if the additional spending is not justified by an increase in government revenue.

Said Godongwana: “We cannot plan permanent expenditure on the basis of short-term increases in commodity prices.” 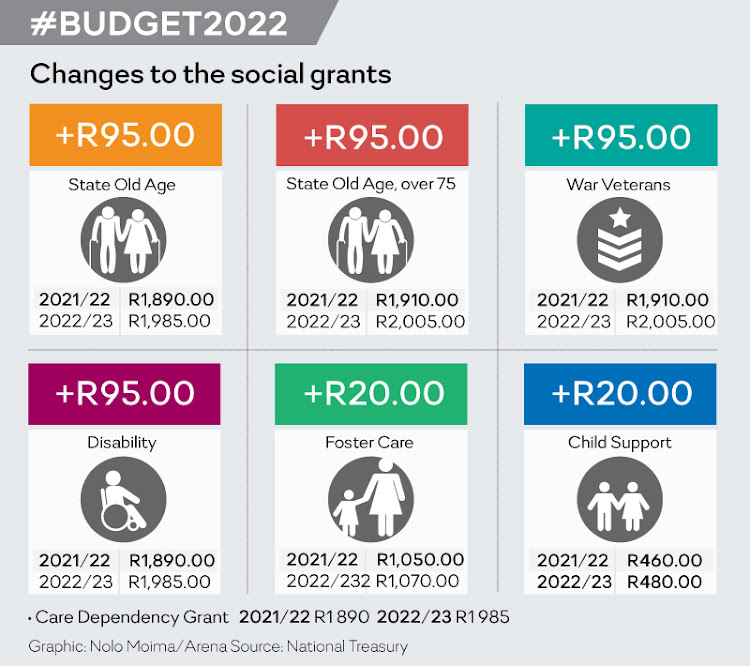 A breakdown of the adjustments to social grants from today's budget speech in parliament.
Image: Nolo Moima/Sunday Times

Discussions are taking place over restructuring the R450bn owed by Eskom, which might see part of the entity’s debt burden moving to the state.
Politics
4 months ago

The National Treasury has resolved not to hike the general fuel levy and the Road Accident Fund levy for the first time in 31 years to cushion ...
Politics
4 months ago