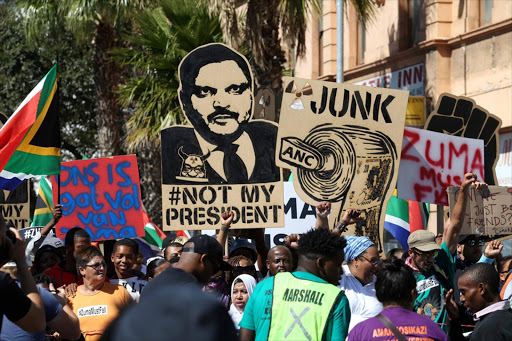 One of them, Zuma’s son Edward, said the ratings agencies “did us a favour, really”.

Displaying a breathtaking ignorance of economics, Zuma’s allies cheered the downgrade, which analysts  warn could restrict the country to a low-growth path for decades.

One close Zuma ally, Water and Sanitation Minister Nomvula Mokonyane, told a WhatsApp chat group: “It’s actually better Western investors will pull back and we have an opportunity to bring them back in our own terms, after we have consolidated our relations with Africa and Brics. We must rearrange our foreign debt repayments.”

Another member of the so-called Black Empowerment Foundation chat group, close Zuma associate and SAA chairwoman Dudu Myeni, replied to Mokonyane: “I concur cdes. Let the rand fall and rise and emerge with the masses.”

While Zuma, once again, emerged victorious after a meeting of the ANC’s extended national working committee, which many had hoped, in vain, would censure him, the economy will be the biggest loser, with some R80-billion wiped off banking stocks alone in less than a week, and the rand falling against the dollar.

Economists have also warned that the downgrade will hit the poor hard, as the cost of borrowing rises and a faltering rand plays havoc with the cost of imported goods, especially fuel.

But South Africans’ concerns for their futures, their investments and their pensions were not shared by the inner circle. As tens of thousands of South Africans marched on Friday in an unprecedented show of protest against Zuma’s misrule, the president’s allies gloated.

Many South Africans don’t have billions on the stock exchange. Those with money should transform this economy. Most black people are born in junk status so they aren’t bothered.”

The chat group is administered by Edward Zuma. It discussed the cabinet shake-up at length in the hours leading up to Zuma’s axing of several ministers and deputy ministers last week, when veteran finance minister Pravin Gordhan was replaced with former home affairs minister Malusi Gigaba.

block_quotes_start It’s actually better Western investors will pull back and we have an opportunity to bring them back in our own terms, after we have consolidated our relations with Africa and Brics block_quotes_end

Edward, who has gained notoriety by hurling insults at his father’s critics, appeared to know several hours beforehand that Gordhan would be axed, telling the group at 9pm: “That one is definitely going Rand or not he is out.”

After the ratings announcement on Monday, he said: “Brics is the only way out of this hell on earth. They did us a favour really.”

Mokonyane confirmed yesterday that she wrote the posts, but said her laughing at a post welcoming ratings downgrades did not mean she was not concerned about them.

“What did you expect me to do?” she asked.

“You want to assume that I’m not horrified? Angithi kuyahlekwa noma k’fiwe [Isn’t it that one can still laugh even if there is a death]? Make your own conclusion baba, bye.”

Tshabalala, who resigned as SABC chairwoman amid a scandal over allegedly false academic qualifications, was excited last week at the prospect of Gordhan losing his job. He had caused “some of us real agony”, she said.

“Every dog has its day! He mobilized against me. Akahambe kahle! [Let him go well],” she wrote.

In real terms, this week’s two ratings downgrades, by S&P Global Ratings and later Fitch, have  dire implications for the rand, which ended the week at R13.83 to the dollar.

On Friday, Fitch said it believed last week’s cabinet reshuffle would weaken standards of governance and public finances. Attention  is now focused on the ratings decision from Moody’s, which is due in June but could come out of cycle like those of the other  agencies.

A second sub-investment grade rating for local-currency debt would trigger a mandatory withdrawal  by pension funds that have invested about $13-billion (R179-billion) in South Africa.

At home, Gordhan’s axing is seen as a critical political turning point, laying bare a deep-seated divide  within the ANC  and its alliance partners. Cosatu and the SACP have called for Zuma to step down.

The call was echoed by ordinary South Africans, who, via political parties, civic organisations  and in their private capacities, came together on Friday in a national stay-away. The protest action was joined by about  60,000 people, according to the government.

Opposition parties are planning to keep up the pressure with a march to the Union Buildings in Pretoria  on Wednesday, and  further mass marches are being planned to coincide with a parliamentary motion of no confidence on April 18.

Zwelethu Jolobe, a lecturer in politics at the University of Cape Town, said the protests were proof that  the ANC-led government was swimming against the tide.

He said the marches were  a good measure of the level of discontent in the country. “Whenever you have a large amount of people marching against the leadership, it’s an important measure of discontent. It’s not so much about the downgrade; it’s  about the narrative we have around the president and the ANC.”

Independent political analyst Daniel Silke said the marches were significant because they were “countrywide and had sufficient turnout”, but were not in themselves a turning point.

They expressed the frustrations of middle-class South Africans but had little support from the working class, he said — although he expected this  week’s marches to be more “populist” when the EFF and other opposition parties  lead another mass action.

“There are essentially two types of resistance and there is little cohesion,” he said.

Silke said the turning point for South Africa would lie in how the ANC reacted to “the mood of the electorate”.

On the WhatsApp group on Friday, Edward said he had contacted metro and national police to ask them to deny permission for the marches in Johannesburg as he had been briefed there was going to be war.

He could not be reached for comment. - Additional reporting by Bianca Capazorio and Thabo Mokone