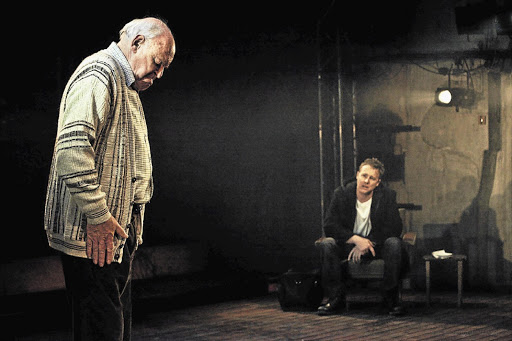 Samuel West and his father Timothy share a scene

Samuel West, who stars with his father in 'A Number'

What is the play about?

Identity, love (and the lack thereof) and the crisis of self.

What attracted you to it?

The ideas of the play were things being discussed in the press: what made you "you", and the physical aspects of cloning.

The play features a father and son. My father was available and we were pleased to act together.

Has the play changed your view of who you are?

Not really. Psychiatrists and geneticists tell us that we're a 50-50 mixture of genetics and upbringing. The play comes down more heavily on the side of nurture being the great aspect of change.

If that is a political point, I agree with it. There's been an enormous growth in the idea of genetic pre-determinism, particularly in terms of gender roles.

In an age of economic and political uncertainty, there's a move towards people being defined by their genetics.

This play refutes that idea, and it's important that we support that because we may only be one generation away from people being difficult to insure because of their genetic make-up.

Nobody is born a serial killer.

This play was first produced in the UK in 2006. What's it like returning to it now?

It's been an opportunity to take a fresh look at it and to question choices we made last time.

Caryl Churchill's writing is so rich and complex that returning to it affords us a chance to delve deeper.