We saw that too, Ntsiki Mazwai took a couple, okay a lot of punches fam. 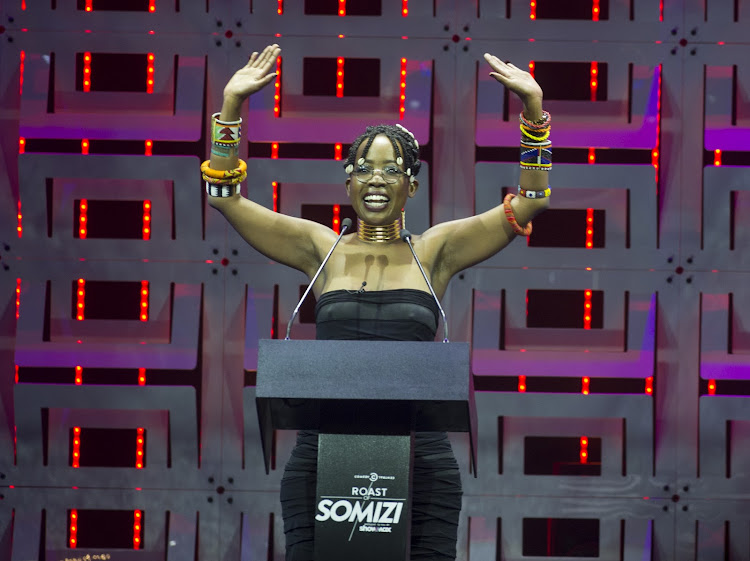 Ntsiki Mazwai handled all the heat that was thrown her way like a pro at the Comedy Central Roast of Somizi.
Image: Supplied.

What was supposed to be a night to roast Somizi Mhlongo turned out to be what Twitter dubbed the revenge of Black Twitter on the outspoken Ntsiki Mazwai.

The roast, which aired on Monday night, left Twitter shocked as they saw the plot twist from the Comedy Central Roast of Somizi to a straight attack on Ntsiki Mazwai.

While a roast is generally done in good spirit, Twitter just couldn't believe how hard everyone went in for Ntsiki, even though the main target was supposed to be Somgaga.

Comedian Skhumba, who was the highlight of the night for most viewers, sealed the night and went in the hardest for Ntsiki.

There was absolutely no recovering after Skhumba was done with Ntsiki. Somizi's fire clapbacks and all the other jokes that followed; including Nomzamo and her toes or Mbaweezy being demoted just couldn't match the volcano that erupted on Ntsiki.

During his pre-show interview, Skhumba made it clear that he wasn't going to stick to the script.

"Tactics for Skhumba? Those things don’t really work for me. I’m a straight-forward guy; I’m just going to speak my mind. I don’t like planning; I don’t like rehearsing. When I rehearse, I’m s*it on stage," he said before the show.

Skhumba was particularly brutal with former minister Fikile Mbalula, comparing him disparagingly to his peers, like Dr Mbuyiseni Ndlozi. “You are useless... The ANC promoted Bathabile Dlamini. And they demoted you. And you are sober.”

He also came for everyone else. Literally!

But most of the viewers on Twitter had already concluded that the Roast of Somizi quickly became the Roast of Ntsiki and that the poet saw serious flames!

So much fire was thrown her way that Twitter felt sorry for the outspoken musician. They also had just the right memes for the plot twist!

Meanwhile Ntsiki smiled through the entire night, like the queen that she is.

The extended, uncut Comedy Central Roast of Somizi is now on Showmax.

The couple will welcome their bundle of joy later this year.
TshisaLIVE
4 years ago

The little man has his own garage of cars.
TshisaLIVE
4 years ago

Kabamo: My aunt won’t let me in the house because of my Rhythm City character

Kabomo says that his life has changed after taking on the role of Robert in Rhythm City.
TshisaLIVE
4 years ago