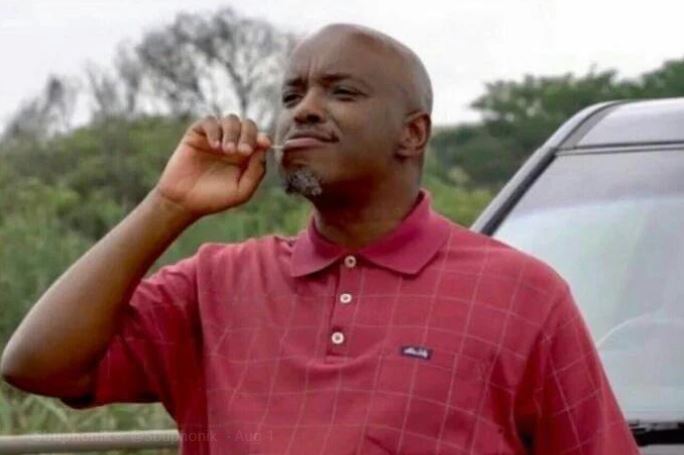 Brutus came up with justification for Shaka's cheating.
Image: Via Mzansi Magic's Twitter

Shaka's cheating has not only caused trouble in his marriage with pregnant Mmabatho but has also caused havoc in the Khoza's unusually peaceful home. So fans knew it was bad when Malume Brutus had to call a family meeting.

You know a situation is dire when the family is forced to call a meeting, even more so when it's Malume Brutus who calls the meeting.  But when he began addressing Shaka's cheating, tweeps weren't so sure it was a good idea anymore.

Malume justified Shaka's cheating and told the family the man was acting crazy on account of the sex draught Mmabatho had forced him to endure by holding out. He coincidentally ignored the fact that Mmabatho is pregnant and hardly has enough patience with herself. Then malume added that Shaka must just cheat far from home and hide it better...

Yhu! Harriet had to step in because if Brutus spoke one minute longer, Mmabatho may have left for good with Shaka's child.

Whether the meeting helped or not remains to be seen. Tweeps had the memes.

#TheQueenMzansi Brutus does not have a problem with Shaka cheating, the problem is he is cheating next to home pic.twitter.com/L7AmQR0GXH

Where does Brutus comes with his reason to back up Shaka's cheating. Only Brutus will have this kind of reasoning #TheQueenMzansi pic.twitter.com/4ieUC8miJ3

Brutus is a bad influence 😂 he's not a role model haibo!!#TheQueenMzansi pic.twitter.com/RMvVsR4OnC

AKA finds peace: Being together with my family again has brought me stability

Although AKA has not officially confirmed that the pair are a couple again, he told TshisaLIVE that being reunited as a family has given him a new ...
TshisaLIVE
3 years ago

People are out here having heart attacks over his paintings.
TshisaLIVE
3 years ago

How far back do Brickz & Cleo go? - A timeline of their work, breakup & reunion

Brickz and Cleo have gone through the most.
TshisaLIVE
3 years ago

Beyoncé coins #MelanatedMonas and slay queens are all over it