'They can mock and judge all they want. I categorically don't give a f***!' Lerato said. 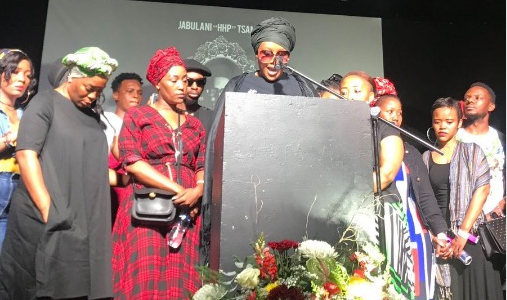 HHP’s motho, aka Lerato Sengadi, has taken to social media to share that she has undergone a traditional and spiritual journey, usually associated with heeding a ancestral calling.

Lerato posted a picture on Instagram of herself in regalia that’s associated with traditional healing and ukuthwasa. Even though she posted a very vague caption along with the picture, Lerato went on to engage with followers, who asked her if she is now a sangoma.

While a lot of people populated the comments section of Lerato's post with congratulatory messages, there was an even larger amount of people saying she's following the trend because it was “fashionable” to be a sangoma. She set the record straight for the naysayers.

"The sad part is that they are implying that our ancestors (prior institutionalised religion) were living in sin and condemned to hell. Which is the furthest thing from the truth. The similarities between African, indigenous American and pacific beliefs is beyond uncanny! So they can mock and judge all they want. I categorically don’t give a f***! What I do care about is knowing the truth about who I am and who God has destined me to be.”

Lerato expressed with sadness at how people judged what they didn’t fully understand.

“It’s unfortunate that we have been programmed that what we as black people believe and practice is wrong. According to who? Western missionaries brought here to dilute who we, as the strongest race known to man, (its) entrenched in our DNA ... anyway, to each his own.”

The publicist also had some scathing words for people that tried to bash her for her ancestral journey, especially one person who implied that Lerato was just attention-seeking.

“I know u were praying I respond. Lucky for you I got time on my hands. So ... here’s a response ... you can get the f**k off my page with your negative bullshit. If ke ya “lapisa” then why the f**k are you here boo?! Go troll someone else who actually gives a f**k about your opinion! God bless. Good night,” she said.

Twitter has come out to defend Lerato Sengadi against Jabba's family.
TshisaLIVE
2 years ago

Lerato Sengadi: I am fired up by the spirits of all marginalised widows in moments of grief

Friends, family and fans have gathered in Mahikeng for Jabba's funeral.
TshisaLIVE
2 years ago

Lerato Sengadi on mourning HHP: Today I will play your music for the first time in 90 days