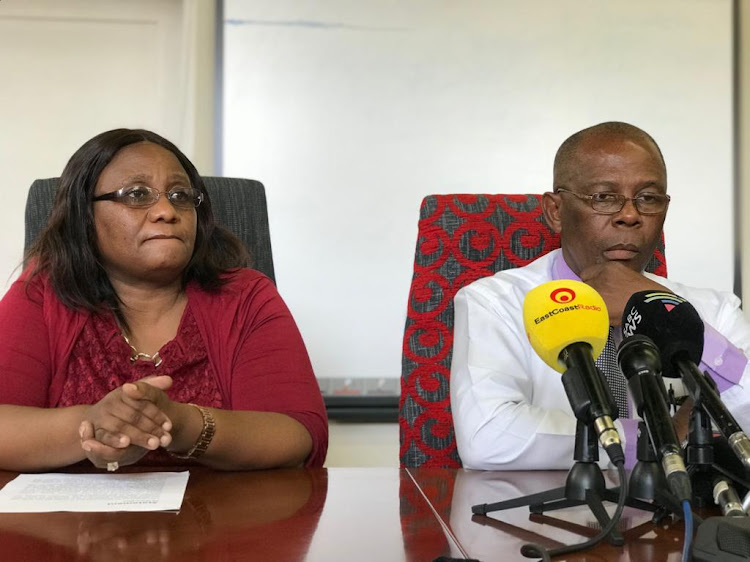 Babes Wodumo’s parents, Thokozile and Welcome Simelane, at a media briefing in Durban on Tuesday March 5 2019. They would not answer questions after reading a statement.
Image: THULI DLAMINI

Musician Babes Wodumo is receiving treatment at home, her father revealed on Tuesday.

Earlier at a press briefing, Welcome Simelane told journalists that the singer was in hospital but official spokesperson Sakhile Mhlonishwa Langa has since clarified that she's in fact receiving treatment at home.

Langa said Babes "is very emotional but stable" and is seeing a psychologist to help her cope.

"Babes was supposed to attend the press conference but the family realised she is not fit enough to address the media."

Langa added that the family was receiving support from church members who were praying for them.

Babes' close friend and rapper Tipcee also shared a post after she visited the Wololo hitmaker to check up on her on Monday evening.

Earlier on Tuesday morning, Babes' family held a press conference in Durban but could not divulge much information "as it is a police matter", they said.

It was then that Babes' father told journalists that she was in hospital. He said it was also the reason she could not make the press conference.

"Our daughter could not be here today she is in hospital receiving treatment," said Welcome.

Babes Wodumo’s mother and father spoke at a press conference on March 5 2019 in Durban after the events which unfolded after a video was posted on Wodumo’s Instagram account, allegedly showing an abusive altercation between herself and her long-term boyfriend.

His wife, Thokozile Simelane, would not be drawn to commenting on her daughter's condition, saying "the matter is with the police".

Simelane also confirmed that a case was opened at Westville police station on Monday.

Meanwhile, police spokesperson Brig Vishnu Naidoo said that Babes' partner, Mandla Maphumulo, better known as Mampintsha, had yet to turn himself in. He is regarded as a suspect in the assault.

Babes' parents refused to answer any questions from the media and walked out after they had read their statement.

Babes and Mampintsha have been making headlines ever since video footage showing a man, believed to be Mampintsha, slapping the Wololo hitmaker several times went viral on Monday.

Editor's Note: This story has been updated to clarify previous comments about Babes being in hospital, which were made at a press briefing on Tuesday morning. The updated version includes the most recent information provided from the official spokesperson.

The EFF in KwaZulu-Natal intends to open a case with police to investigate footage of musician Mampintsha, who stands accused of assaulting his ...
Politics
2 years ago