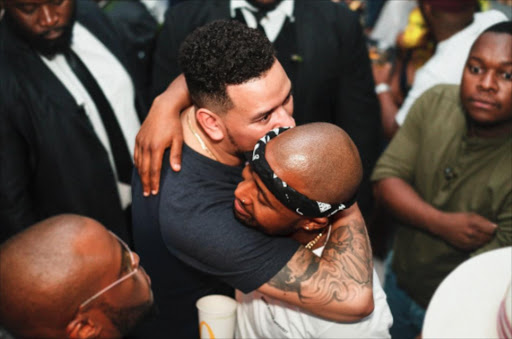 AKA and Cassper during a peaceful period in the rivalry.
Image: Thembani Manganyi

Hip-hop rivals Cassper Nyovest and AKA won't be slugging it out over who has the best watermelon-flavoured vodka range in Mzansi after Cîroc confirmed to TshisaLIVE that it would not be releasing it's new flavour in SA.

AKA and Cassper both had a social media meltdown on Tuesday evening when US star Diddy teased the launch of Cîroc in a watermelon flavour.

Cassper is an ambassador for Cîroc, while AKA launched a watermelon flavoured range of Cruz Vodka.

The pair have long taken shots at each other over who has the best vodka.

When fans saw that Diddy was joining the watermelon wave which AKA has been riding, they suggested it was a defeat for Cass.

Did Cass really take the L or is it a win for both rappers?
TshisaLIVE
3 years ago

While AKA helped #EverybodyLovesWatermelon trend on Twitter, fans anticipated that the war between the two would soon move to liquor store shelves when Cîroc watermelon is released locally.

However, in a statement to TshisaLIVE, Cîroc's manufacturers confirmed that the flavour will not be heading to our shores.

"Diageo SA would like to confirm that there are currently no plans in place to bring the Cîroc Summer Watermelon flavour to the South African market. We understand that the launch of the aforementioned flavour has caused major confusion on social media over the past week. The launch of the watermelon variant will be rolled out in some markets, excluding South Africa," spokesperson Jay Badza explained.

He said flavours were rolled out seasonally, according to a region's demand, and said South Africans could look forward to getting their hands on Cîroc in a limited-edition pack designed by well-known US fashion designer Jeremy Scott.

Tweeps have asked Cassper to keep some things to himself following a series of tweets about self-love.
TshisaLIVE
3 years ago