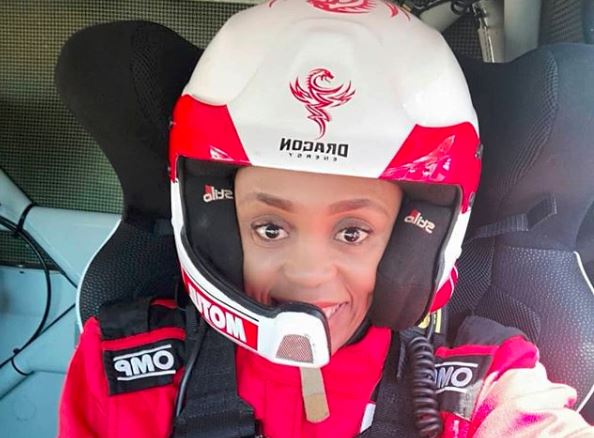 Letshego Zulu, who is a fitness guru and the widow of race car driver Gugu Zulu, took to the racing track over the weekend to ensure the Zulu name returns to South African motorsport and although she explained that it was "tough" she slayed!

Letshego, whose husband died after struggling with respiratory problems as they attempted to climb Mount Kilimanjaro in 2016, explained that the racing bug bit her last year and she's been preparing for this race since then.

Although she wasn't in the driving seat, Letshego experienced the full adventure of race car driving.

"So, I'm back for my second time in the navigator's seat beside Terence Marsh. The racing bug bit last year November and I couldn't resist but to come back. It's intense and hectic in the navigator's office. You get shaken like a rag doll while trying to read notes, follow the GPS, keep an eye on the odometer and look out the window to make sure you're going the right way. Not for the fainthearted but I love it!" she said.

Not exactly the race champion like her late husband, Letshego took the challenge head-on with grace only she could muster. She explained that she had some major challenges but made it through.

The adventurous motivational speaker and biokineticist captured the moments on the race track on her Instagram.

"The weekend's racing is done and dusted. We had the qualifying [round] yesterday that went fairly well, it was a bit rough. The only mistake that I made was that I didn't take my motion sickness tablets and I got quite sick," she said.

Letshego also mentioned that there were other challenges in her adventure like "brake failure" but luckily they pulled through with the help of other people at the race track.

Watch her video below.

2nd time in the race car done and dusted ✔️ It was a weekend full of "personality". From motion sickness to failed brakes to loose stearing wheels and of course being shaken like a rag doll. Terence and I took it all on the chin and never gave up 🙌 I'm happy to report that I now have 2 SA Cross Country events under my belt. Adding them to my long list of adventures. Thank you to @marsh_terence @redlinedmotoringadventure and all the sponsors and partners Nissan, BPGodridge, Dragon and Motul. #AdventureWoman #Berg400 #SACCS

Focus on the possibilities for success, not on the potential for failure. . My weekend office. . South African Cross Country Series. . #AdventureWoman #RedlinedMotoringAdventure #IChooseToLive

Beast got all flushed after the video message from Trevor.
Sport
3 years ago

Altovise has represented Mzansi's talent in Hollywood films and says the one major difference is how they treat actors.
TshisaLIVE
3 years ago

Sis says social media and its ideas of beauty can be a trap.
TshisaLIVE
3 years ago