‘God has been good’ — Duma Ndlovu receives another honorary degree 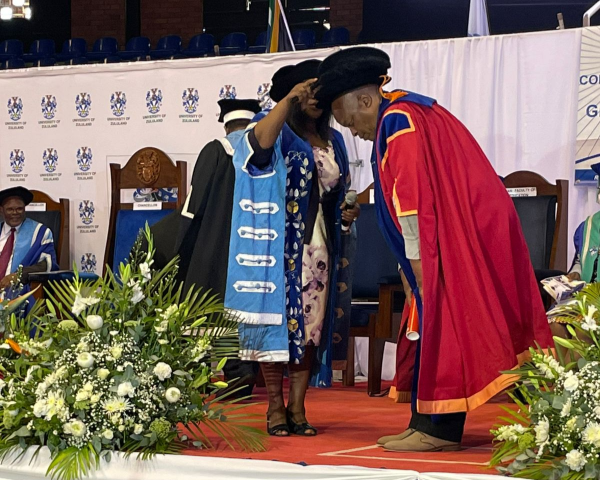 A statement shared by Word of Mouth productions said the ceremony took place on Monday at Ongoye Campus.

The degree was awarded by the faculty of Humanities and Social Sciences and  Dr Ndlovu said he was elated as this was the second  honour after the University of Venda bestowed an honorary PhD in English on him a few years ago.

“I am delighted to receive this honorary doctorate. It’s a huge honour for me. I want to extend my sincere thanks to the university. It is humbling to see one’s work being acknowledged in this way and God has been good.” said Ndlovu

The TV producer is no stranger to SA television with shows like Muvhango, Imbewu: The Seed and Uzalo under his belt.

“The year-long celebrations will mark the anniversary of the soapie by engaging passionate fans and igniting audiences' excitement. We have many exciting new things that will be announced soon, which will include a chance for viewer interactions. We will also be shooting scenes in Venda to celebrate our 25th anniversary, Riya Hayani” said Duma.

To celebrate the soapie shared a 29-second video which left many feeling nostalgic, and DJ Sbu took to his Instagram to honour the stars that paved the way for him.

“Baby Joe, Mr Duma Ka Ndlovu, Mr Mfundi Mvundla, Bra Percy Langa, Tebogo Mahlatsi, Desire Markgraff, Angus Gibson, Godfather, Mr Irvin Khoza, Mr Motaung, Mr Jomo Sono, and so on, thank you for all your contributions to to arts, sports and entertainment. I know you don't like the spotlight, and you prefer being behind the scenes, but on behalf of a lot of us, who became household names in this country and created careers for ourselves, thank you.

"I know you don't like the spotlight, and you prefer being behind the scenes, but on behalf of a lot of us who became household names in this country ...
TshisaLIVE
2 months ago

The 'Black Panther' star has been recognised for his outstanding contribution to the performing arts.
TshisaLIVE
1 year ago

"Now that I'm grown being part of this it feels like I've created history in this world. I feel like I've actually etched my name in a stone that has ...
TshisaLIVE
2 months ago

Actor Dingaan Mokebe aka James Motsamai and his colleagues will not take off their masks to take selfies with you...
TshisaLIVE
1 year ago