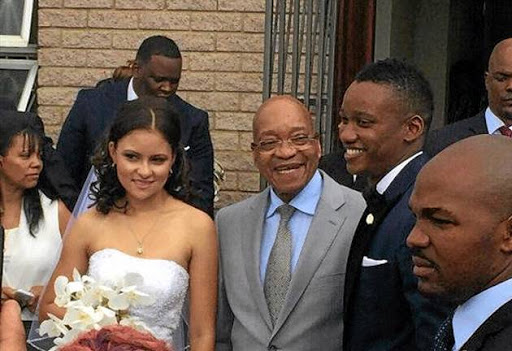 PRESIDENT DUDUZANE?: If Jacob Zuma fails to install his ex-wife as his successor, be ready to welcome his son to the throne
Image: SUPPLIED

In the 1990s, when the world faced massive and seemingly intractable problems, it often turned to South Africa for leadership.

The stature and moral probity of Nelson Mandela were key in resolving the decades-old war in the Democratic Republic of Congo. Roelf Meyer and Cyril Ramaphosa were pivotal in bringing peace to Northern Ireland. Desmond Tutu, Alex Boraine and many of their colleagues at the Truth and Reconciliation Commission were called upon in scarred countries across the globe to help heal, reconcile and move forward from the grip of repressive regimes.

A confused post-Cold War world looked up to South Africa for moral and ethical leadership. We were an example of what humanity, ably led, can achieve.

When President Thabo Mbeki and Nigeria's President Olusegun Obasanjo called on the west to scrap punitive and criminal historical debt carried by African and many other developing countries, they did so not as a bunch of looting kleptocrats trying to make a quick buck for themselves.

Say what you will about them, they were upstanding leaders in their own right - and they got some of that debt scrapped.

Once, just a few years ago, we were leaders in the world. We were not perfect, but we were on the side of the good people of the world, respected and lauded by many.

In 2003, Idi Amin, the former Ugandan ruler who had declared himself president for life, died of multiple organ failure at King Faisal Specialist Hospital in Jeddah, Saudi Arabia. He had been there, in exile, since 1979.

Amin took power in a coup in 1971. He immediately implemented his own version of "radical socio-economic transformation". Accusing his Asian compatriots of dominating the economy, he expelled all of them and took over their businesses. The country's economy collapsed. Amin's rule was punctuated by violence and murder, with human rights groups saying he was responsible for the deaths of as many as 300000 people during his eight-year rule.

It is worth recording what his compatriots said about Amin on hearing of his death in 2003. Ugandan President Yoweri Museveni called the death of the former dictator "good".

"His death and burial will signal the end of our bad past," Museveni's spokesman said.

The world is awash with sub-standard leadership of the Amin variety at the moment. From the west to the east, the picture is gloomy. The "hard men" of politics are back, establishing repressive regimes from the Philippines to Turkey. They don't care about climate change, human rights or waging endless wars against defenceless nations.

Sadly, South Africa is now joining the rogues of the world with shameless gusto. The past week's e-mail revelations in various newspapers have demonstrated clearly that President Jacob Zuma is running a criminal cartel with his son Duduzane and the Gupta family as his henchmen.

The e-mail leaks have proved what many of us have said all along: we are quickly joining the rogues of the world, no longer fit to invoke the name of Mandela.

Who are we now? The richest person in Angola is Jose Eduardo dos Santos' daughter. She got there through government kickbacks and contracts. She owns everything, or a percentage of everything, that moves in Angola.

Dos Santos, who was opposed to Mbeki's reformist efforts on the continent in the 1990s and 2000s, backed Zuma in the run-up to the ANC's 2007 conference.

Zuma has learnt a lot from him, clearly. Look at how Zuma and his son move in lock step - Duduzane carries his father's dirty lucre. It's an Angolan story.

The house that the Sunday Times revealed yesterday is Zuma's in Dubai. It is around the corner from one owned by Robert Mugabe of Zimbabwe. Birds of a feather flock together.

In Equatorial Guinea, which Zuma visited just months after ousting Mbeki in 2008, Teodoro Nguema Obiang Mangue was appointed vice-president in 2012. Who appointed him? His father, Teodoro Obiang Nguema Mbasogo, who has been in power since 1979.

Here at home Zuma is doing absolutely everything in his power to install his former wife as his successor. If that fails be ready to welcome President Duduzane, branded as our very own Emmanuel Macron.

In his closing speech to the ANC's national executive committee last week, Zuma apparently said some of his comrades are trying to poison him. Such paranoia is common among dictators who know that their day of reckoning is looming.

All these revelations tell us that we live in a mafia state, a place of lawlessness where Zuma and his cronies are getting away with murder. That is why we have fallen so far down in the eyes of the good people of the world - we are counted among the looters, dictators and kleptocrats of the world. Mandela's glorious memory is long gone.

But these e-mail leaks also tell us that Zuma is scared. He knows that people will not tolerate his actions for much longer. He knows that he will have to flee to Dubai or elsewhere. He knows that he is going to die alone and lonely, far from his beloved Nkandla, a fugitive from the law.

It is now just a matter of time.