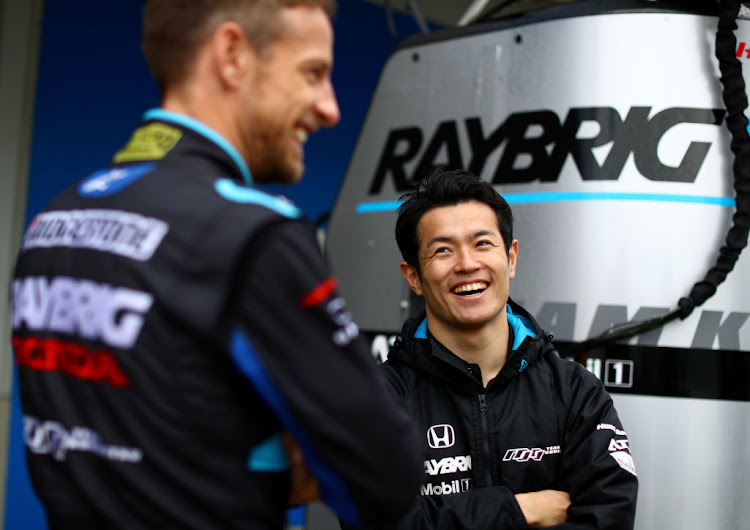 Naoki Yamamoto of Japan chats with teammate Jenson Button of Great Britain at the Suzuka Circuit in April last year. On Friday Yamamoto will drive a Toro Rosso in opening practice at the circuit.
Image: Clive Rose/Getty Images

Honda-backed Japanese Naoki Yamamoto will take part in a Formula One grand prix weekend for the first time on Friday when he drives a Toro Rosso in opening practice at his home Suzuka circuit.

Red Bull-owned Toro Rosso are powered by Honda, and Suzuka is owned by the Japanese manufacturer. The last Japanese to race in Formula One was Kamui Kobayashi with now-defunct Caterham in 2014.

Yamamoto, 31, is reigning champion in Japanese Super Formula and the Super GT touring car series, where he has partnered 2009 Formula One world champion Jenson Button.

His age rules him out, however, as a realistic race prospect for a team that develops and feeds young talent to the main Red Bull outfit.

"It will be a special moment and I'm glad I will get to share it with the fans at this amazing race track, where I first watched Formula One cars in action 27 years ago," he said.

Yamamoto will take Pierre Gasly's car for the session before handing it back to the Frenchman for the rest of the weekend.

"We hope Naoki makes the most of this opportunity, that he learns from it and that it helps him as a racing driver," Katsuhide Moriyama, Honda's head of brand operations, said in a statement.

Honda-backed Nobuharu Matsushita is competing in Formula Two this season, and Yuki Tsunoda is a race winner in Formula Three.

Honda's Marc Marquez sealed his sixth MotoGP title with four races to spare after winning the Thai Grand Prix for the second year in a row on Sunday ...
Motoring
2 years ago

Welcome to the first instalment of Forgotten F1 Friday: a nostalgic look back at some of the coolest cars to ever line up on the grid of motorsport's ...
Motoring
2 years ago