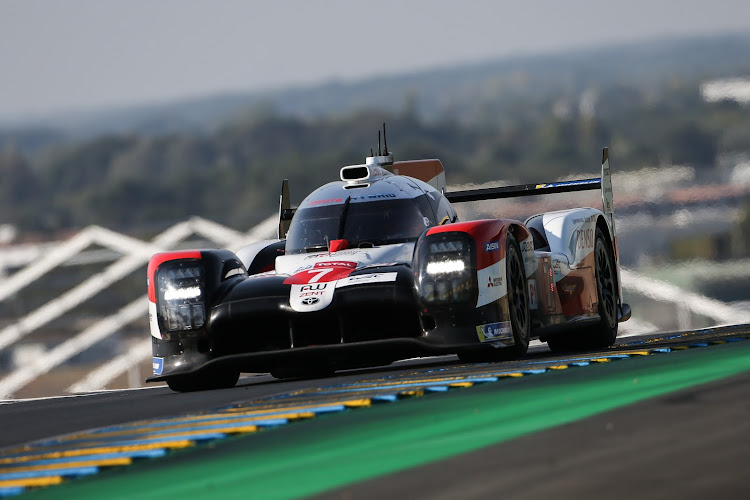 Kamui Kobayashi put Toyota's number seven car on pole position on Friday for a condensed and rescheduled Le Mans 24 Hours race being held without spectators due to the Covid-19 pandemic.

The Japanese veteran made sure of the champions' fourth successive pole on a sunny morning at the Sarthe circuit but fell short of his 2017 record of three minutes 14.791 seconds in the TS050 hybrid car.

Kobayashi's fastest lap in the new Hyperpole session was 3:15.267.

“To be honest, a little bit disappointed because on my second attempt it seemed I could break my record,” he said of his time.

“Unfortunately, I had the lap deleted (for exceeding track limits), so I had to stop. I was gaining already seven tenths, which is already breaking the record, so it’s a big shame.”

Toyota are the only major manufacturer in the top LMP1 category at the 88th running of the event and favourites for a winning hat-trick in the last Le Mans outing for the hybrid car before the new hypercar era in 2021.

The gruelling highlight of the world endurance calendar last year drew a crowd of 250,000.

Kobayashi has yet to win it, finishing runner-up in the last two years while compatriot Kazuki Nakajima stood on top of the podium with number eight car team mates Sebastien Buemi and Fernando Alonso.

The number eight Toyota, with Nakajima at the wheel, qualified only third this time with Rebellion Racing's number one R13 Gibson car splitting the two Japanese.

American Gustavo Menezes' time in the Rebellion was a Le Mans record by a non-hybrid LMP1 car.

Friday's 30-minute hyperpole session featured 23 of the 59 entrants — the top six in the four classes after a preliminary qualifying session on Thursday.

There are only five entries in the LMP1 category in a race that also features two all-female crews.

Postponed from June, the race will be waved away at 1230 GMT on Saturday by Peugeot boss Carlos Tavares.

Because of the later date, nearly half of the race will be held in darkness — some three hours and 40 minutes more than mid-June.

The lights will finally go green for the first round of the 2020 SA Global Touring Cars (GTC) championship at Red Star Raceway, Delmas, Mpumalanga, ...
Motoring
7 months ago

Australia's Bathurst 1000 to go ahead with limited crowd

Australia's most iconic motor race, the Bathurst 1000, will go ahead at the Mount Panorama Circuit next month but the crowd will be limited to 4,000 ...
Motoring
7 months ago

Valencia Grand Prix organisers are looking to welcome fans into the Ricardo Tormo Circuit for the second of two races in November - provided ...
Motoring
7 months ago
Next Article