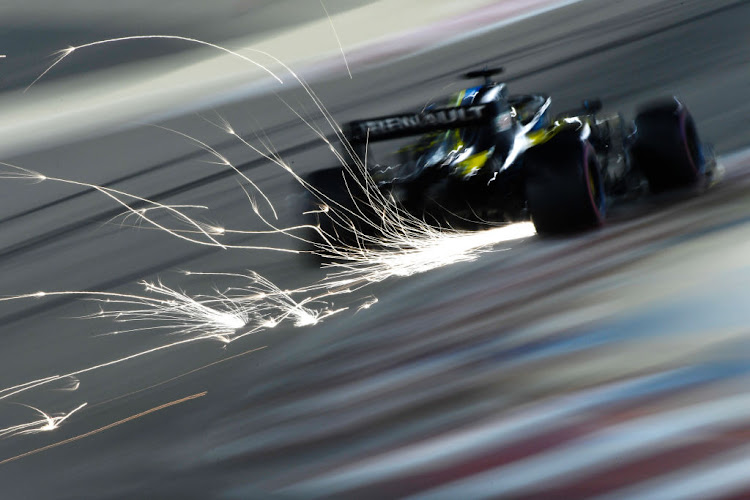 Sparks fly behind Daniel Ricciardo of Australia driving the Renault Sport Formula One Team RS20 during qualifying ahead of the F1 Grand Prix of Sakhir at Bahrain International Circuit on December 5 2020.
Image: Rudy Carezzevoli/Getty Images

Formula One could award championship points for Saturday "sprint" races this season under a proposal to be discussed by bosses on Thursday.

The shorter races would set the starting grid for the main grand prix on Sunday if the Formula One commission votes in favour of the format.

Qualifying for the sprint race would be on Friday instead of second practice.

The BBC reported the top eight drivers in the sprint race, lasting an hour and about a third of the distance of a regular race, would earn roughly half the points awarded in a grand prix.

To become reality, the proposal would need the backing of eight teams. A previous plan to hold sprint races with reversed grids failed to win approval.

One team source told Reuters the plan was to trial the shortened race at three grand prix weekends - Canada, Brazil and Monza in Italy - though the calendar could change due to the Covid-19 pandemic.

Formula One's current format is for two practice sessions on Friday followed by a third on Saturday before qualifying for Sunday's race.

The change is aimed at creating more excitement through increased track action.

"We are thinking if this could be tested this year," he told reporters. "Discussions are going on with the teams in the right forum."

Formula One's motorsport managing director Ross Brawn last month told the racefans.net website he would like to see some weekends follow a different format to gauge responses without committing the whole championship to change.

The BBC said a sticking point to the latest plan wasthe potential cost of damage to the cars in the sprint race exceeded the extra money being offered by Formula One to the teams.

Formula One saw a 4.5% drop in its average race television audience last year and a reduced overall viewing figure that reflected a smaller season ...
Motoring
2 months ago

Lewis Hamilton's new Formula One deal has ended speculation about his plans for this season but the one-year duration raises questions about how long ...
Motoring
2 months ago

Former Formula One driver Kevin Magnussen will race for Peugeot in the World Endurance championship (WEC) and the Le Mans 24 Hours race in 2022, the ...
Motoring
2 months ago
Next Article