Brad Keselowski prevails in overtime for sixth win at Talladega 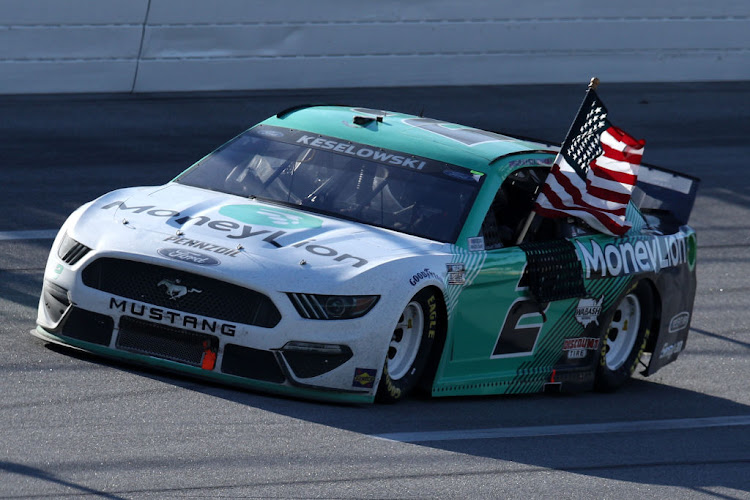 Brad Keselowski led just one lap in Sunday's Geico 500, but it was the right one — the last one — and it enabled him to become a six-time winner at Talladega Superspeedway.

The victory came in overtime and it gave him his first victory of the season in his No. 2 Team Penske Ford.

“The whole race I had a couple opportunities to take the lead,” Keselowski said, “but I just kept thinking, ‘Man, keep your car in one piece.'”

Though the victory was No. 6 at Talladega in his career, it was his first at the Alabama oval since 2017. In the races since then, he has had a best finish of 13th.

“We've been so close here and it just didn't seem to want to come together here the last few years and I've been on kind of a four-year drought here, but it's nice to get number six,” he said. “I would have never dreamed I'd tie Jeff Gordon and Dale Earnhardt Jr. here. That's something. Those guys are really legends.”

Finishing second was William Byron of Hendrick Motorsports, who was looking for his second win of the season. The margin of victory was .102 seconds.

Third was 2021 Daytona 500 winner Michael McDowell, who finished .103 behind the winner.

“It's been a great season for us,” McDowell said. “I really felt like I was in a good spot working with Brad. Thought I'd have the run.”

Rounding out the top five were Kevin Harvick of Stewart-Haas Racing and Matt DiBenedetto, who restarted the race in OT with the lead and who was attempting to give the iconic Wood Brothers Racing team its 100th victory in Cup.

DiBenedetto had the lead on the final restart but a decision to go high in an attempt to block a surging outside line of cars proved to be the wrong decision.

“It's tough. It's all just so circumstantial. Our day will come. I'm just lucky to drive this thing. Driving for the Wood Brothers is a dream come true,” said DiBenedetto, who will be replaced by Austin Cindric after the season.

Of DiBenedetto's move up the track, Keselowski said, “Merry Christmas.”

The first major wreck of the day was not a big one in terms of the number of cars involved but it was big for a driver who was among the pre-race favourites. On Lap 59 — the final lap of Stage 1 — Joey Logano was knocked sideways. His car then went airborne before rolling down the track. Logano is a three-time winner at Talladega and had led 10 laps on Sunday.

After being released from the infield care centre, Logano blamed nobody but the type of racing which superspeedways breed. “We have to fix it, though,” he said. “Somebody got hurt (Ryan Newman at Daytona last year) and we're still doing it.

“On one hand, I am mad about being in the crash and on the other, I am happy to be alive. On another hand, I am wondering when we are going to stop because this is dangerous doing what we are doing. I got a roll bar in my head. That is not OK.”

A second significant wreck occurred with two laps left in State 2 collected several cars that appeared capable of winning — those of Denny Hamlin, who led 44 laps to that point, his Joe Gibbs Racing teammate Martin Truex, Jr., Chase Elliott and his Hendrick Motorsports teammates Bryon and Alex Bowman. All continued on but the cars of Hamlin and Bowman suffered serious damage and fell off the lead lap.

Harrison Burton, son of former star Jeff Burton, made his Cup debut Sunday and it didn't start well. His team was penalised for making unapproved adjustments before the start. In the race, he was penalised again when his first-ever Cup pit stop ended when he lifted his stall with the gas can still attached to the fuelling port.

However, Burton was in position to win in OT before making a move that cost him several spots. He finished 20th.

NASCAR heads north next weekend to race at Kansas Speedway in Kansas City.

Red Bull have hired Ben Hodgkinson from Formula One rivals Mercedes as technical director of their own engine company, the team said on Friday
Motoring
9 months ago

Netflix is in production on a documentary series involving Bubba Wallace and his journey with the newly formed 23XI Racing Team, the company ...
Motoring
9 months ago