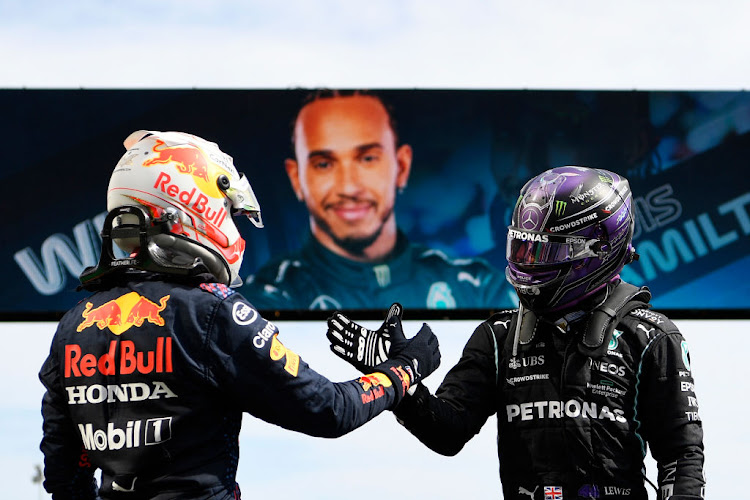 Race winner Lewis Hamilton of Great Britain and Mercedes GP interacts with second placed Max Verstappen of Netherlands and Red Bull Racing in parc ferme after the F1 Grand Prix of Portugal at Autodromo Internacional Do Algarve on May 2 2021 in Portimao.
Image: Gabriel Bouys - Pool/Getty Images

Formula One title rivals Lewis Hamilton and Max Verstappen have gone wheel-to-wheel in all three races this season but both expect the racing to stay firm but fair as the pressure rises.

In a sport where fine margins and small mistakes can have big outcomes, and with a record 23 races scheduled this year, the seven-times world champion saw plenty of battles to come.

"We’re going to be sick of each other at the end I would imagine, or sick of racing, because there are so many races," joked Hamilton.

The rivalry could boil over with so much at stake, with 36-year-old Hamilton chasing records while 23-year-old Verstappen seeks a first crown, but the tone on Sunday remained one of mutual respect.

"I always have full trust in Lewis that we always give each other enough space," said Verstappen, who has won one race and finished second twice.

"I just second that," said Hamilton.

The gap at the top would have been just seven points but for Verstappen having a fastest lap and bonus point deleted for going too wide.

Hamilton, superlative on Sunday, has also erred – skidding off in race two at Imola before fighting back from ninth to second.

He won against the odds in the Bahrain season-opener after Verstappen, on pole, ran wide while overtaking him.

Verstappen won at Imola, muscling past Hamilton on the opening lap, and might have taken pole in Portugal from Mercedes' Valtteri Bottas but again went just too far off and had a fastest time deleted.

Both made mistakes on Sunday that allowed the other to overtake.

"This championship will come down to all the marginals and it’s still at an early stage," said Red Bull boss Christian Horner.

"Max is driving the wheels off the car and it’s super, super tight between us. We’re race three, we’re eight points behind in the drivers’ (standings), it’s nothing. This championship is going to be a marathon rather than a sprint."

Despite Red Bull starting the season with an apparent performance advantage, Mercedes lead both championships and are getting back to the sort of form their fans have come to expect.

"I think we had a good car, the first time we were really able to compete for pole," said team boss Toto Wolff.

"I wouldn’t have believed it because I rely on probabilities and maths," he said.

"I wouldn’t have expected to be on pole twice and win two races. That was not what my brain would have told me."

Red Bull's Max Verstappen completed an unwanted 'track limits' triple when he was stripped of a fastest lap bonus point at the Portuguese Grand Prix ...
Motoring
1 year ago

Kyle Busch held off the field after a restart with three laps to go and went on to win the Buschy McBusch Race 400 NASCAR Cup Series race at Kansas ...
Motoring
1 year ago