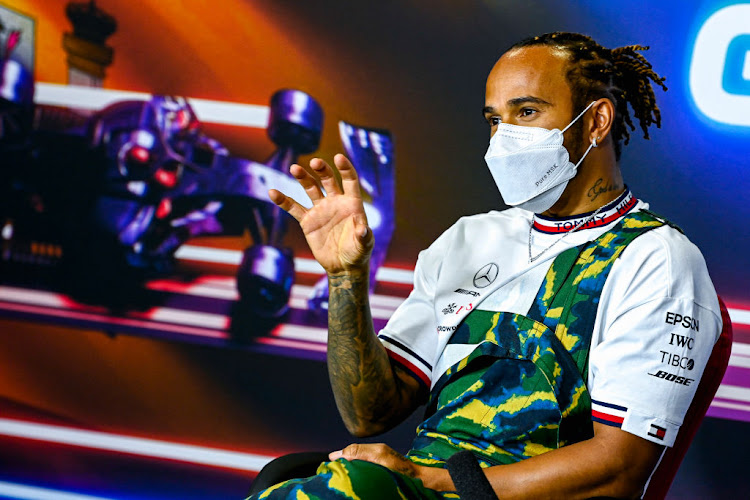 Lewis Hamilton talks in the drivers' press conference during previews ahead of the F1 Grand Prix of Spain at Circuit de Barcelona-Catalunya on May 6 in Barcelona, Spain.
Image: Mark Sutton – Pool/Getty Images

Seven-times Formula One world champion Lewis Hamilton defended Valtteri Bottas as an amazing teammate on Thursday after the Finn faced questions about his future at Mercedes and the possibility of being replaced midseason.

Bottas is already 37 points behind championship leader Hamilton after three races, and fourth overall in the drivers' standings.

The Daily Mail this week quoted an anonymous Mercedes engineer saying there was “some unrest” at the factory and suggested Bottas could be replaced by Mercedes-backed Williams driver George Russell.

“I feel like we have the best line-up currently, in terms of the equilibrium that's within our team,” Hamilton told reporters at the Spanish Grand Prix. “At some stage it's going to change, I'm not going to be here forever, Valtteri won't be here forever but right now I think he's delivered time and time again over the years and he continues to.

“Valtteri qualified on pole last race. It's only the fourth race (this weekend). I think people need to give him a break and just let him focus on doing what he's doing.”

Bottas had earlier given short shrift to the speculation, with an additional dig at rivals Red Bull who have switched drivers repeatedly.

“I know that I'm not going to be replaced in the middle of the season,” he said. “As a team, we don't do that. I have a contract for this year and I think there's only one team that does that kind of thing in F1 and we're not that (team).

“So no pressure from my side and I know how things are. There's always bullshit around, that's part of the sport.”

Asked whether he expected to be at Mercedes next year, Bottas replied: “I don't know. It's early days. I haven't thought about it really. At the moment I don't care. I'm just focusing on this year.”

Mercedes team boss Toto Wolff recognised after last weekend's Portuguese Grand Prix that a sensor failure had hampered Bottas in the battle for second place in that race.

The Finn had bounced back to take pole after crashing out of the preceding Emilia Romagna Grand Prix at Imola after a collision with Russell, who had been trying to overtake for ninth place.

“We let him down with the engine that went into a safety mode,” said Wolff in Portugal. “Like many times it could have worked for Valtteri and we were pushing hard and continue to support him and see what he is capable of doing in Barcelona.”

Valtteri Bottas shot down media speculation on Thursday that he could be replaced as Lewis Hamilton's Mercedes teammate midway through the season and ...
Motoring
1 year ago

Red Bull have hired another group of engine experts from Formula One rivals Mercedes as they prepare to build their own power unit after Honda's ...
Motoring
1 year ago

The days of 140,000 fans cheering Fernando Alonso to a home victory in Spain are long gone but the double Formula One world champion returns this ...
Motoring
1 year ago