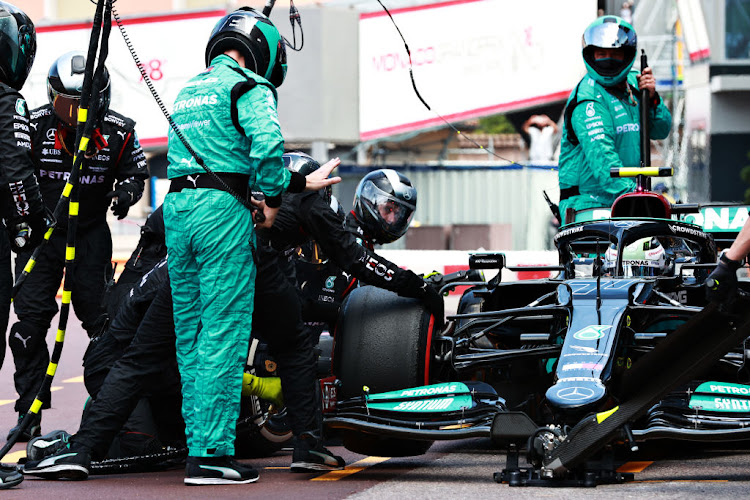 Valtteri Bottas makes a pitstop but his front right wheel is stuck on his car during the F1 Grand Prix of Monaco at Circuit de Monaco on May 23 2021 in Monte-Carlo, Monaco.
Image: Mark Thompson/Getty Images

Valtteri Bottas said he raised concerns about Mercedes' pit stops ahead of last month's Monaco Grand Prix which saw the Formula One champions fail to remove a wheel from his car, forcing the Finn's retirement from second place.

Bottas, whose arrival in Azerbaijan for this weekend's sixth round of the season was delayed by travel disruption, told reporters on Thursday that what happened was not a complete surprise.

The stuck wheel was eventually removed at the factory in England some 43 hours after the race.

“It was one of my concerns already a few weeks ago, that I raised with the team. It didn't come from somewhere out of the blue,” Bottas said by video link from Finland before his flight to Baku.

“We knew that we are not perfect in pit stops as we've seen, and also other areas like tyre warm up in qualifying. I knew coming to Monaco that it is going to be an issue and it was one of the things that I'd highlighted much before the weekend.”

Bottas had been second in the race, behind Red Bull's eventual winner and now overall leader Max Verstappen, when the failed pit stop happened.

Team boss Toto Wolff later said the Finn had stopped slightly beyond the pit lane markers, making it harder for the mechanic to get the correct angle to change the wheel.

Bottas said he was surprised by the comments.

“I saw the video and for me it was pretty spot on where I stopped. Yes, I was quite surprised,” he said. “I think I was like 2cm or 3cm off the central line. And if you get that accuracy normally, it's pretty good.”

The driver, who is out of contract at the end of the season, said it had taken him a couple of days to get over the disappointment but he was now keen to get going again.

Daniel Ricciardo said he had complete faith in his ability to deliver and was ready to put the 'train' back on track after a tricky start to the ...
Motoring
3 months ago

Max Verstappen will start Sunday's Azerbaijan Grand Prix as Formula One world championship leader for the first time but also with his Red Bull under ...
Motoring
3 months ago

Australian Remy Gardner, son of 1987 500cc world champion Wayne, will move up to MotoGP next season, the Tech3 KTM team announced on Wednesday
Motoring
3 months ago