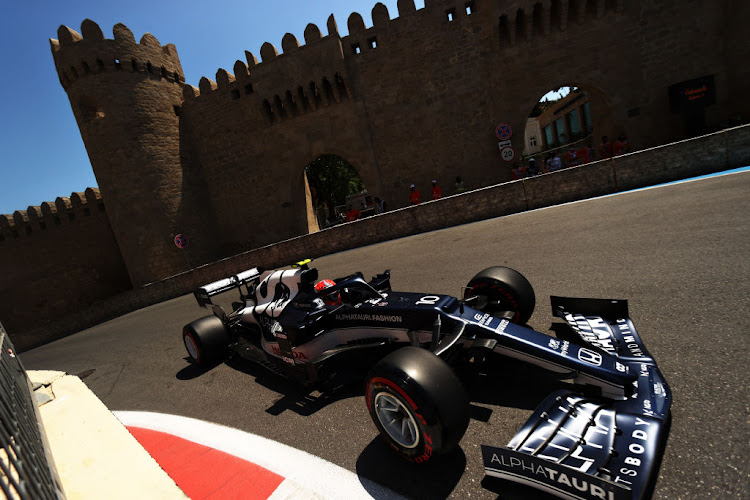 Pierre Gasly during final practice ahead of the F1 Grand Prix of Azerbaijan at Baku City Circuit on June 05, 2021 in Baku, Azerbaijan.
Image: Clive Rose/Getty Images

AlphaTauri's Pierre Gasly was surprisingly fastest in final practice for the Azerbaijan Grand Prix on Saturday, as Red Bull's Formula One championship leader Max Verstappen crashed into the barriers.

Frenchman Gasly, a winner for the Red Bull-owned team in Italy last season, lapped the Baku street circuit with a best time of one minute 42.251 seconds in an eventful session on a hot afternoon.

Mercedes' seven-time world champion Lewis Hamilton was third, after earlier complaining of a lack of grip, but his pace was increased significantly by running in the Mexican's slipstream.

The aerodynamic 'tow' on the long and fast straight may have been worth as much as six tenths of a second to the Briton, Mercedes estimated.

The champions have struggled for speed in every session and were out of the top 10 on Friday. Hamilton's Finnish team mate Valtteri Bottas was only 13th and 1.494 off Gasly's time.

Verstappen, leading the championship for the first time and four points clear of Hamilton after five races, was left as a mere spectator for much of the session after going into the barrier at turn 15.

The session was halted for the car, with a broken front wing and suspension, to be removed.

Perez, who was fastest on Friday and has a strong record in Baku with two previous podium finishes for now-defunct Force India, was top of the time sheets until near the end when Gasly pulled out his best effort.

Williams' George Russell brought out the virtual safety car when he stopped with an engine problem.

“No power. No gears. Lost power,” said the Briton over the team radio.

The Singapore Formula One Grand Prix has been cancelled for the second year in a row due to the Covid-19 pandemic, two well-placed sources told ...
Motoring
3 months ago

Valtteri Bottas said he raised concerns about Mercedes' pit stops ahead of last month's Monaco Grand Prix which saw the Formula One champions fail to ...
Motoring
3 months ago