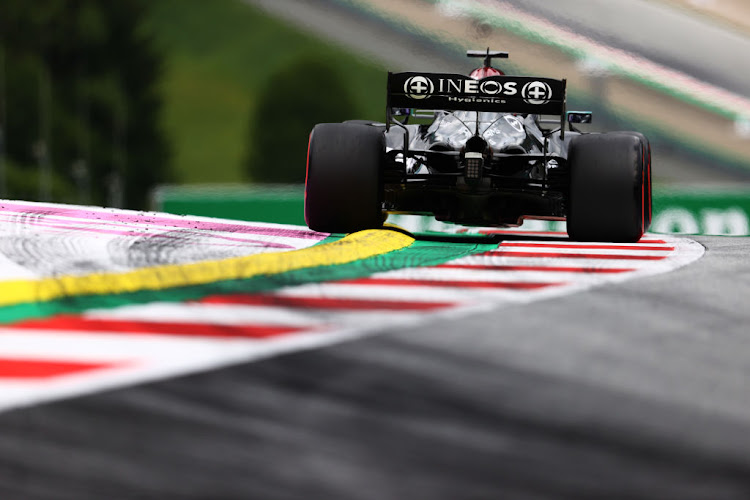 Lewis Hamilton during practice ahead of the F1 Grand Prix of Austria at Red Bull Ring on July 2 2021 in Spielberg, Austria.
Image: Clive Rose/Getty Images

Seven-times Formula One world champion Lewis Hamilton unlocked some pace and led a Mercedes one-two on the first day of practice for the Austrian Grand Prix on Friday.

Red Bull's championship leader Max Verstappen had been quickest in the opening session at the Red Bull Ring, where he won the Styrian Grand Prix last Sunday, with a time of one minute 05.143 seconds.

Hamilton clocked a best lap of 1:04.523 in the afternoon, with team mate Valtteri Bottas second in 1:04.712 and Verstappen third, but the Briton was not celebrating.

"They've definitely got something extra in their bag, I already know that," he said of Red Bull.

"But I think we've made small progress today. I think they still have the two-tenths or maybe it's a tenth-and-a-half. We've definitely made small steps forward but not enough, it's not the two-tenths.

"I expect them to turn up (the engine) a little bit more tomorrow," he said.

Verstappen will be chasing his third win in a row, and fifth of the season, this weekend with plenty of his Dutch fans cheering him in the biggest crowd of a season restricted by Covid-19 precautions.

The 23-year-old is 18 points ahead of Hamilton after eight races.

"I expect more engine to come from these guys (Red Bull) tomorrow, but we've improved in some of the corner sequences so that's encouraging," said Mercedes team boss Toto Wolff.

Teams were in the morning session testing a new Pirelli tyre with a stronger construction  after high-speed failures in the Azerbaijan Grand Prix on June 6. It could be introduced at this month's British Grand Prix if approved.

Pirelli have also brought softer compounds for this weekend, which should mix up the strategy.

Formula Two leader Zhou was the quickest of the stand-ins, with the 14th-best time.

Red Bull's Formula One championship leader Max Verstappen picked up where he left off with the fastest time in first Friday practice for the Austrian ...
Motoring
4 weeks ago

Michael Schumacher was Sebastian Vettel's boyhood hero, and the younger German is providing guidance and a point of reference for the Formula One ...
Motoring
4 weeks ago

Aston Martin announced on Thursday the arrival of aerodynamicist Andrew Alessi as their new head of technical operations, the second senior employee ...
Motoring
4 weeks ago