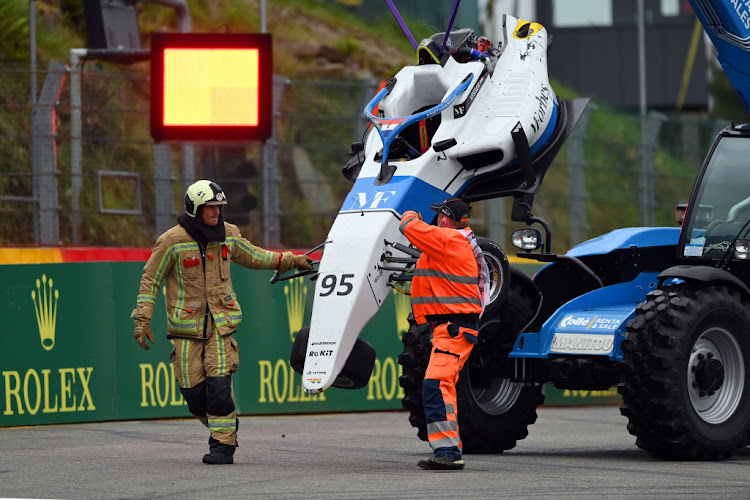 The car of Beitske Visser is removed from the circuit following a crash during qualifying ahead of W Series Round 5 at Circuit de Spa-Francorchamps on August 27, 2021 in Spa, Belgium.
Image: Dan Mullan/Getty Images

Dutch driver Beitske Visser and Norwegian Ayla Agren were discharged from hospital after a six-car pile-up in qualifying for the all-female W Series race at the Belgian Grand Prix on Friday.

The Formula One support series said the pair, plus Britons Abbie Eaton and Sarah Moore, Spaniard Belen Garcia and Liechtenstein's Fabienne Wohlwend who were taken to the medical centre for checks, had been given the all-clear.

“Thankfully it seems everyone is OK. The cars have stood up unbelievably well to what looks like a massive crash,” said racing director Dave Ryan.

The crash put fresh scrutiny on the Spa-Francorchamps circuit after several serious accidents, including the death of Formula Two racer Anthoine Hubert two years ago.

Williams F1 reserve Jack Aitken suffered a broken collarbone in a crash at the same place in the Spa 24 Hours endurance race at the end of July.

“There needs to be a change at this corner and I'm very surprised nothing has changed yet. Enough is enough,” Alfa Romeo reserve Callum Ilott said at the time on social media.

Friday's crash happened as the cars began the climb up the fast sweep of Eau Rouge towards Raidillon, with Moore and Eaton spinning into the barriers and being hit by the others.

Eaton and Visser's cars were both launched into the air by the impact, with Wohlwend's car turned upside down. The session was red-flagged and then restarted.

Mexican Sergio Perez will race on with Red Bull next year alongside Max Verstappen, the Formula One team said in a statement on Friday
Motoring
3 weeks ago

Seven-times Formula One world champion Lewis Hamilton said both he and his Mercedes team would be in better shape for the second half of the season, ...
Motoring
3 weeks ago