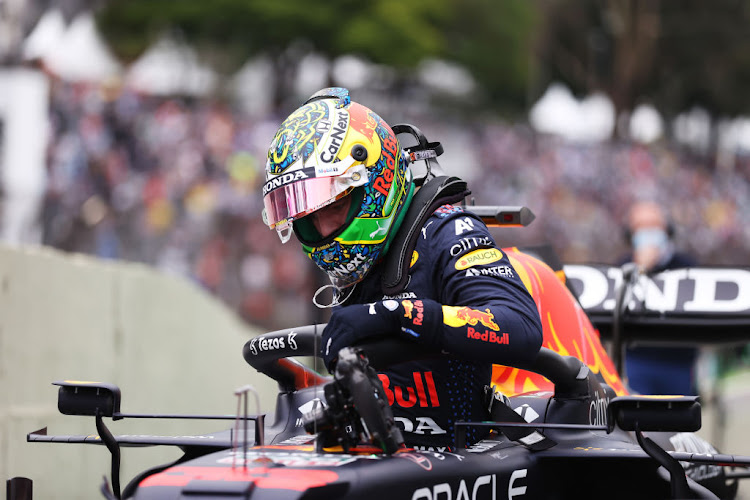 Formula One title rivals Max Verstappen and Lewis Hamilton both faced possible sanctions on Saturday after being accused of breaking the rules ahead of the Sao Paulo Grand Prix.

On a day of drama in Brazil after qualifying for a Saturday sprint race that determines Sunday's starting grid, Mercedes driver Hamilton and then Red Bull's championship leader Verstappen caught the stewards' attention.

Seven-time world champion Hamilton dominated qualifying at the Interlagos circuit but his car then failed a technical check, with the risk of demotion to the back of the sprint field.

Stewards ordered the rear wing assembly to be impounded and the car stored overnight.

A spokesperson for the governing FIA said the officials were awaiting further evidence that would not be available until morning.

A statement then delivered another bombshell by summoning Verstappen and a team representative to a meeting at 0930 local time (1230 GMT) for an alleged breach of the international sporting code.

Video footage posted by a fan on social media showed Verstappen seemingly checking with his hands the rear wings of his Red Bull and Hamilton's Mercedes after they had parked up post-qualifying.

Article 2.5.1 of the sporting code states that “no operation, checking, tuning or repair is allowed” in that secure area unless authorised by officials.

Hamilton, 19 points adrift of Verstappen with four races remaining, already has a five-place grid penalty for Sunday's race after Mercedes changed the engine in his car.

The Briton had clocked a fastest time of one minute 07.934 seconds with Verstappen 0.438 slower, a considerable margin around one of the shortest laps on the calendar.

Three points are to be won in the sprint but Hamilton's chances of taking them were thrown into doubt by a measurement of millimetres.

Formula One technical delegate Jo Bauer reported the uppermost rear wing adjustable positions did not comply with the rules for a maximum distance of 85mm when the drag reduction system was deployed.

Hamilton had earlier told reporters the car was finally performing to his liking.

“A lot of the times we get it wrong, I get it wrong, and today I got it right and the car was really nice to drive. It was everything I wanted,” he said.

Verstappen said Hamilton's new engine had clearly made a difference.

“For me it’s not a big shock. I’m just happy to be second. That’s a good position to start from. Of course you always want to be closer but sometimes you just have to be realistic and there was not much more in it,” he said.

The 100km sprint is the last of three in the experimental format this season, with the other two being at Monza and Silverstone.

Mercedes' Valtteri Bottas was third fastest with Red Bull's Sergio Perez alongside on the second row.

Team boss Christian Horner agreed: “That fresh engine is obviously pumping out some horsepower for (Hamilton) so I think second was the best we could hope for,” he said.

“If you look at the relative speed (of Hamilton) compared to Valtteri it's a couple of tenths.”

AlphaTauri's Pierre Gasly starts fifth with the two Ferraris of Carlos Sainz and Charles Leclerc followed by the two McLarens of Lando Norris and Daniel Ricciardo in the battle for third overall.

Further back George Russell was out-qualified by Williams team mate Nicholas Latifi — the first time that has happened though the actual grand prix grid positions will not be decided until Saturday.

Lewis Hamilton made the most of a new engine to beat Formula One leader Max Verstappen with the fastest lap in qualifying for the sprint race that ...
Motoring
3 weeks ago

Lewis Hamilton will take a five-place grid penalty for Sunday's Sao Paulo Grand Prix in another blow to the Briton's hopes of winning a record eighth ...
Motoring
3 weeks ago

Max Verstappen fans will have to get used to a new number next season if Red Bull's Formula One leader wins the world championship.
Motoring
3 weeks ago