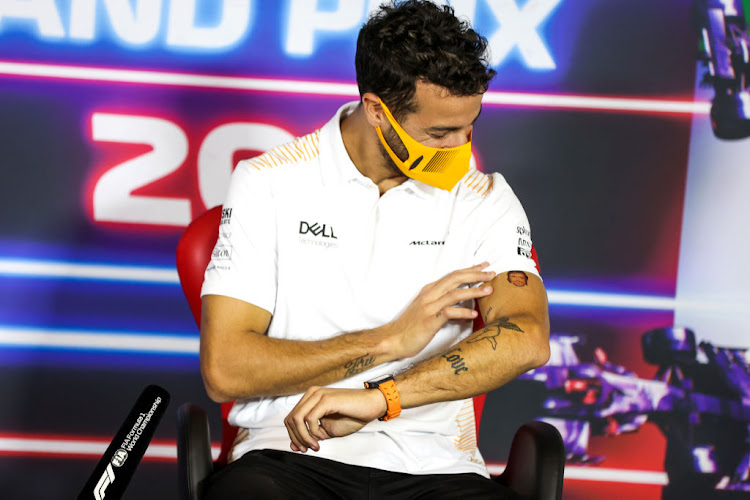 Daniel Ricciardo of Australia and McLaren F1 shows off his temporary Fernando Alonso tattoo during previews ahead of the F1 Grand Prix of Abu Dhabi at Yas Marina Circuit on December 9 2021 in /United Arab Emirates.
Image: Antonin Vincent - Pool/Getty Images

McLaren's Daniel Ricciardo is planning a two-week spell in mandatory quarantine after the Formula One season finishes so he can enjoy the Australian summer at home with his family.

The 32-year-old Perth native has not been back to Australia since 2020, with his home race in Melbourne cancelled for two seasons in a row due to the Coivd-19 pandemic.

"I'll be staring at a hotel room ceiling for two weeks," he told reporters at the Abu Dhabi Grand Prix on Thursday when asked about his plans.

"I'm going to go home. I need to, I need to get home. But it's difficult. Unfortunately, they're not making it easy, but it is what it is. I need to see family, friends."

"Once I get out of the four walls, I should hopefully three or four weeks with friends and family. It's summer, so something to look forward to."

Ricciardo is ending his first season at McLaren after moving from Renault.

The Australian won the Italian Grand Prix in a one-two with Lando Norris, McLaren's first victory since 2012, but his form has been inconsistent.

He agreed it had been the biggest emotional rollercoaster of his career and said Monza was a career high, despite seven previous wins with Red Bull.

"The more time that passes since Monza the more I realise the effect of that.  I do think it was the biggest moment, win, race, kind of day of my motorsport career," he said.

Ricciardo was replaced at Renault by double world champion Fernando Alonso, now 40 and making a comeback after two years out, and the Australian revealed the Spaniard had given him a gift in Abu Dhabi.

"Fernando got me for Secret Santa," he said.

"Along with a nice bottle of red, he also got me temporary Fernando tattoos. It's beautiful," he laughed, showing off his arm with Alonso's head inked on it.