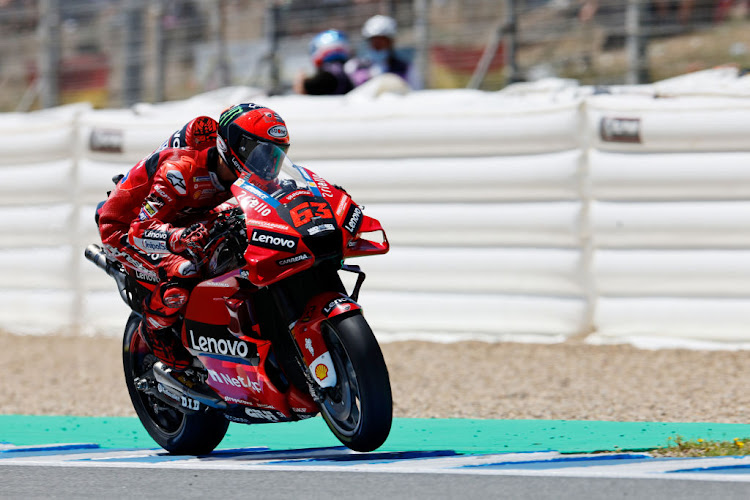 Pole sitter Bagnaia, who set a new lap record at the Jerez circuit in qualifying on Saturday, flew out of the traps and never relinquished first place despite a late charge from Quartararo, who was chasing his second win in Spain.
Image: Juan Carlos Toro/Getty Images

Ducati's Francesco Bagnaia won his duel with world champion Fabio Quartararo of Yamaha in commanding fashion as he clinched his first victory of the season at the Spanish Grand Prix in Jerez on Sunday.

Pole sitter Bagnaia, who set a new lap record at the Jerez circuit in qualifying on Saturday, flew out of the traps and never relinquished first place despite a late charge from Quartararo, who was chasing his second win in Spain.

“It's a beautiful day. We struggled a lot during testing this season but we never stopped working,” said Bagnaia. “Finally, everything went well this weekend. I'm really happy — we are back to our potential.”

Bagnaia, a preseason favourite, got off to a difficult start this year after crashing out in the opening race in Qatar and injuring his shoulder during qualifying for last week's Portuguese Grand Prix.

“I was lucky to race in Portugal,” added the Italian, who recovered and finished a remarkable eighth in Portimao despite starting from the back of the grid. “Last year Fabio was unbeatable here but today we did an incredible job.”

Quartararo added that it was an intense battle and praised Bagnaia for not letting him pass.

“It was a really tough race. Pecco (Bagnaia) made an amazing start, amazing race. I tried everything but he was really, really fast. Our pace we managed to get today was insane.

“My front tyre was super hot, super high pressure. I couldn't brake more harder but I could maintain the pace with him.”

Suzuki's Alex Rins, who was joint-leader in the world championship coming into the race, slipped to fourth after he went off the track on turn 12 and finished 19th, while Pramac Ducati also had a forgettable outing, with Johann Zarco crashing out and Jorge Martin finishing 22nd.

Riders will now head to France for the seventh round of racing in two weeks' time.

The Targa Tasmania will be completed as a non-competitive event after a driver died on Wednesday, the fourth fatality in two years at the annual ...
Motoring
3 weeks ago

Formula One race directors Eduardo Freitas and Niels Wittich have both tested positive for Covid-19, raising questions about who will take charge of ...
Motoring
3 weeks ago

Formula One champions Mercedes could have new parts available to improve their bouncing car in time for next week's Miami Grand Prix, trackside ...
Motoring
3 weeks ago