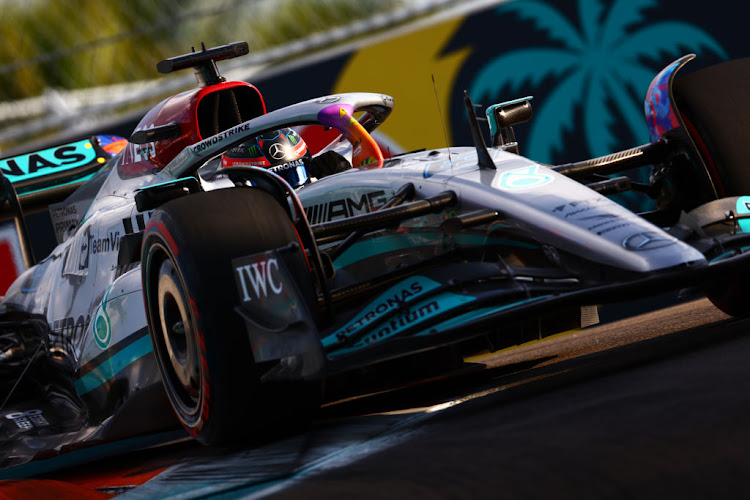 George Russell on track during practice ahead of the F1 Grand Prix of Miami at the Miami International Autodrome on May 06, 2022 in Miami, Florida.
Image: Mark Thompson/Getty Images

George Russell put his revived Mercedes team back on top of the Formula One time sheets with the fastest lap in second practice for the inaugural Miami Grand Prix on Friday.

In a boost for the champions who have wrestled with a 'porpoising', or bouncing, car in the first four races, the Briton was 0.106 of a second faster than Ferrari's overall leader Charles Leclerc.

Russell's impressive time of 1:29.938 seconds made Mercedes look more competitive than they have so far this campaign.

“We always knew that the warm conditions here in Miami would suit our car better — we’ve suffered with getting temperature in the tyres at previous races so that’s a big factor here,” said Russell.

“The car is running well but it’s only Friday, we’re not getting carried away. It’s probably been the most productive Friday we’ve had this season in terms of learning,” he added.

Red Bull's world champion Max Verstappen, who was third in first practice, failed to set a time in the second session after his car suffered an hydraulics problem and the brakes overheated.

“He's had a horrible day,” said team boss Christian Horner. “It's frustrating not to have that track time.”

His Mexican team mate Sergio Perez was third fastest in practice two but was unimpressed with the Miami track.

“I am really disappointed there is no grip offline. It’s a shame because I think the racing will be bad due to that. As soon as you try to go offline, there is no grip,” the Mexican said.

Leclerc and Verstappen have each won twice this season, with the Ferrari man 27 points clear of the Dutch 24-year-old whose efforts have been undermined by mechanical problems and retirements.

Mercedes have brought new parts in the hope of unlocking performance and first impressions were of clear improvement, with the car in a low-drag set-up and looking faster without bouncing.

“We still have the bouncing so we haven’t cured it but bit by bit, we’re improving the car,” said Hamilton.

“The race is going to be tough, particularly with the tyres overheating and it’s very hot for the drivers, I’ve already lost a couple of kilos today,” he said.

The humid first session around the Miami Dolphins' Hard Rock Stadium was halted with 24 minutes to go when Alfa Romeo's Valtteri Bottas spun backwards into the tyre barrier at turn seven, damaging his car's rear wing.

Action resumed after a 10-minute break but Bottas did not go out in the second practice.

Haas driver Mick Schumacher and McLaren's Daniel Ricciardo were summoned to the stewards after an earlier incident that saw the German narrowly avoid smashing into the rear of the Australian's car.

The stewards decided to take no further action.

Alpine's Esteban Ocon was reprimanded for a pit lane near-miss with Russell after the Frenchman's team made an unsafe release.

Leclerc, bouncing back from a disappointing weekend at Ferrari's home Imola circuit two weeks ago, spun early on while team mate Carlos Sainz, sixth fastest, suffered a puncture after the red flag period.

The Spaniard then crashed in the second session.

Norris takes a dig at Russell with basketball helmet

McLaren's Lando Norris took a dig at Mercedes rival George Russell at the inaugural Miami Grand Prix on Friday as he faced questions about his new ...
Motoring
2 weeks ago