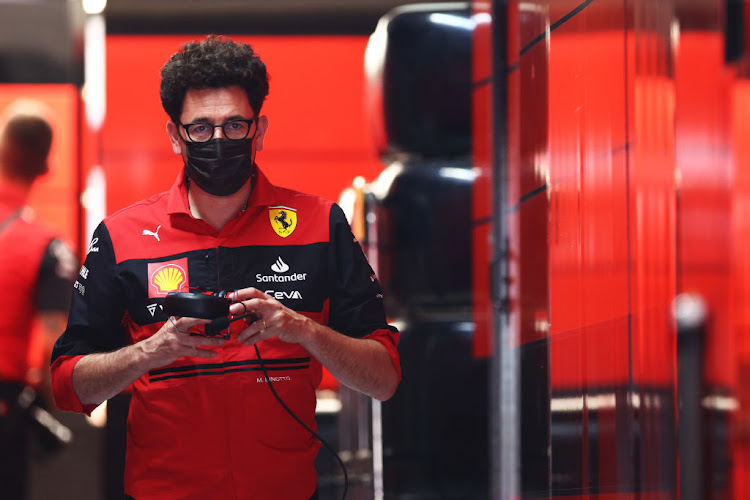 Mattia Binotto says there is no reason why Ferrari cannot win 10 races from now to the end of the 2022 F1 season.
Image: Clive Rose/Getty Images

Ferrari are targeting a one-two win in Hungary on Sunday to ease the pain of Charles Leclerc's costly crash while leading in France last weekend.

“We need to turn the page and look to Hungary and do a one-two there,” team boss Mattia Binotto told reporters after Leclerc's blank.

“There is plenty of reason why we need to smile. Our objective should not be winning but a one-two.

“There is no reason why not to win 10 races from now to the end.”

Ferrari started the season with a one-two in Bahrain, but have yet to repeat the feat, getting both drivers on the podium on only two further occasions in Saudi Arabia and Miami.

Leclerc, despite seven poles, has retired from the lead on three occasions while teammate Carlos Sainz has suffered four retirements in 12 rounds.

Red Bull expect Hungary, where the weather is again likely to be hot and tyre management will be key, to play more to their rivals' strengths.

“I don’t expect Hungary to be particularly our best track, because I think we are lacking a bit of downforce compared to Ferrari, and that’s what you need to run there,” said Verstappen.

Red Bull boss Christian Horner agreed, saying the Hungaroring “will probably play more to the Ferrari’s strengths than our strengths”.

The race is the last before the August break, with Verstappen already sure of leading into September. If results go his way, he may not need to win again after Sunday.

Alpine's Esteban Ocon won, his first victory in Formula One, ahead of seven-time world champion Lewis Hamilton for Mercedes, who dropped from pole to last and back up to second.

Hamilton, now on the longest streak of his career without a win, felt after finishing second in France that Hungary, where he has won a record eight times, could be a better weekend.

“It's going to be hard to beat the Ferraris and the Red Bulls, you see they have their pace advantage still,” he told reporters, adding Verstappen's advantage made it “pretty smooth sailing” for the Dutchman.

“But I'm hoping we will bring some sort of upgrade to that track and hopefully take a step forward closer to them.”

Ferrari-powered Haas will have their first major performance upgrade of the season on Kevin Magnussen's car, with Mick Schumacher having to wait a while longer due to a shortage of new parts.

Formula 1 is on schedule to use 100% sustainable fuel in its race cars by 2026, according to managing director of motorsports Ross Brawn.
Motoring
2 weeks ago

Formula One driver Sergio Perez is entering his own Mexican team in an all-electric racing boat championship due to start next year, organisers said ...
Motoring
2 weeks ago

Formula One teams say they need a quick decision, preferably before the August break, on proposed 2023 technical changes that aim to end the sport's ...
Motoring
2 weeks ago