Fugitive Carlos Ghosn says he was treated brutally after arrest

'I didn't escape because I was guilty, I escaped because I had zero chance for a free trial,' says former Nissan Renault boss at news conference 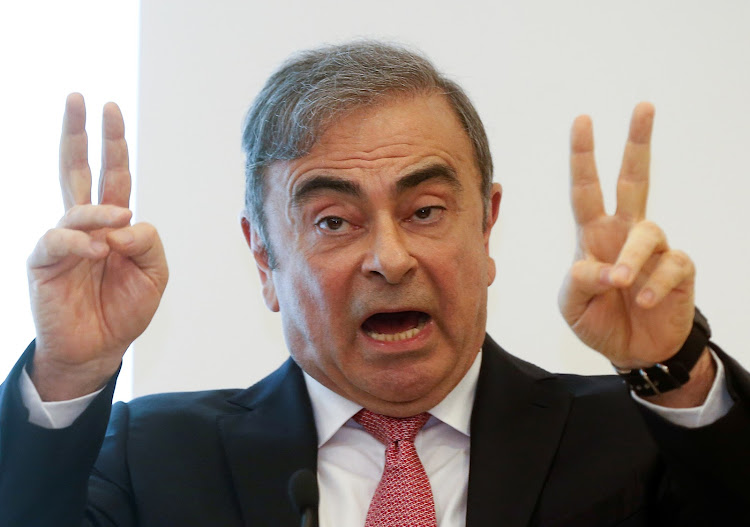 Carlos Ghosn hit out at the 'brutality' of the Japanese justice system, saying he was interrogated for up to eight hours a day.
Image: Reuters

Carlos Ghosn, speaking publicly for the first time since his dramatic escape from Japanese justice, said on Wednesday he had been treated “brutally” by Tokyo prosecutors and was the victim of an inside job to oust him from the helm of automaker Nissan.

The one-time titan of the car industry said in a two-hour news conference in Beirut on Wednesday that he had no choice but to flee. The alternative was to spend the rest of his life languishing in Japan without a fair trial.

Ghosn, 65, fled Japan last month as he was awaiting trial on charges of underreporting earnings, breach of trust and misappropriation of company funds, all of which he denies.

“I felt like the hostage of a country I served for 17 years,” he told reporters.

In a combative performance, he gave a point-by-point rebuttal of the charges, which he said he had been prevented from doing before, and compared the surprise of his arrest with Japan's pre-emptive strike on Pearl Harbor during World War 2.

Ghosn said he had escaped to his childhood home of Lebanon to clear his name and declined to say how he fled, noting there were conflicting stories about his astonishing escape.

Carlos Ghosn to 'speak freely' after his escape; what's in store?

“The charges against me are baseless,” he said, repeating his allegation that Nissan and Japanese authorities colluded to oust him after a downturn in Nissan's fortunes and in revenge for French government interference in the carmaker's alliance with Renault.

Tokyo prosecutors said his allegations of a conspiracy were false and that he had failed to justify his acts.

“Defendant Ghosn's allegations completely ignore his own conduct and his one-sided criticism of the Japanese criminal justice system is totally unacceptable,” the Tokyo prosecutor's office said after Ghosn spoke.

The 14-month saga has shaken the global auto industry, jeopardised the Renault-Nissan alliance, of which Ghosn was the mastermind, and increased scrutiny of Japan's judicial system.

Ghosn said he had no intention of merging Renault with Nissan as some in Japan feared, but wanted to put the firms under a holding company that would have maintained a balance between the French carmaker's push for a union and the Japanese company's desire to remain autonomous.

He named Masakazu Toyoda, an independent director at Nissan and a special adviser to the Japanese cabinet, Nissan’s ex-auditor Hidetoshi Imazu and the car company's former executive vice-president Hitoshi Kawaguchi as the main architects of his downfall.

Carlos Ghosn slipped out of Japan 'in a musical instrument case'

Imazu, Kawaguchi and officials at Nissan could not immediately be reached for comment.

“First, if he (Ghosn) has anything to say, he should do that openly in court before he leaves Japan illegally. A conspiracy story without any evidence sounds like a joke,” one person referred to by Ghosn said .

Ghosn covered many subjects, talking about his Marie Antoinette-themed party at the Palace of Versailles in France and describing harsh confinement in Tokyo’s main jail.

“I was brutally taken from my work as I knew it, ripped from my family and my friends ... It is impossible to express the depth of that deprivation,” he said.

“I was interrogated for up to eight hours a day without any lawyers present ... 'It will get worse for you if you don't just confess', the prosecutor told me repeatedly.”

Ghosn became most animated in describing how he thought the Nissan-Renault alliance had lost its way since his departure, saying it had fallen behind in investment in technology, profitability and market value, and failed to seize opportunities, such as a potential tie-up with Fiat-Chrysler.

Ousted Nissan boss Carlos Ghosn confirmed he fled to Lebanon, saying he wouldn't be "held hostage" by a "rigged" system, raising questions about how ...
Motoring
1 year ago

“How do you miss that? It's unbelievable,” he said.

Nissan has said an internal investigation found that Ghosn had engaged in personal use of company money and had under-reported his income in violation of Japanese law.

Japan's ministry of justice has said it will try to find a way to bring Ghosn back from Lebanon, even though it has no extradition treaty with Japan.

“I didn't escape because I was guilty, I escaped because I had zero chance for a free trial,” he said, adding that he was prepared to stand trial in any of his three home countries, Lebanon, France or Brazil, none of which have extradition agreements with Japan.

When asked if he had been given any assurances from Lebanese officials about not being extradited, he said: “I am confident that the existing practices and laws will be respected in Lebanon and this is what I heard from all the officials here.”

Ghosn said the Japanese authorities were intent on preventing him from having his say.

“Why have they spent 14 months trying to break my spirit, barring any contact with my wife?” he said.

Tokyo prosecutors issued an arrest warrant for Ghosn's wife, Carole, on Tuesday for alleged perjury related to the misappropriation charge against her husband.

Turkish and Japanese authorities are investigating how Ghosn was smuggled out to Beirut. Interpol has issued a “red notice” seeking his arrest.

“This (escape) was the most difficult decision of my life, but I was facing a system where the conviction rate is 99.4% and I believe the number is far higher for foreigners,” he said.

“When I saw I was free it was as if I was born again.”

Renault SA, Nissan Motor Co and Mitsubishi Motors on Wednesday said they had promoted Hadi Zablit to general secretary of their automaking alliance ...
Motoring
1 year ago

Nissan Motor Co CEO Makoto Uchida said on Monday he would work to improve the automaker's financial performance and co-operate closely with alliance ...
Motoring
1 year ago

Nissan Motor Co reported a 70% drop in quarterly profit on Tuesday and cut its full-year forecast to an 11-year low, hit by a strong yen and falling ...
Motoring
1 year ago