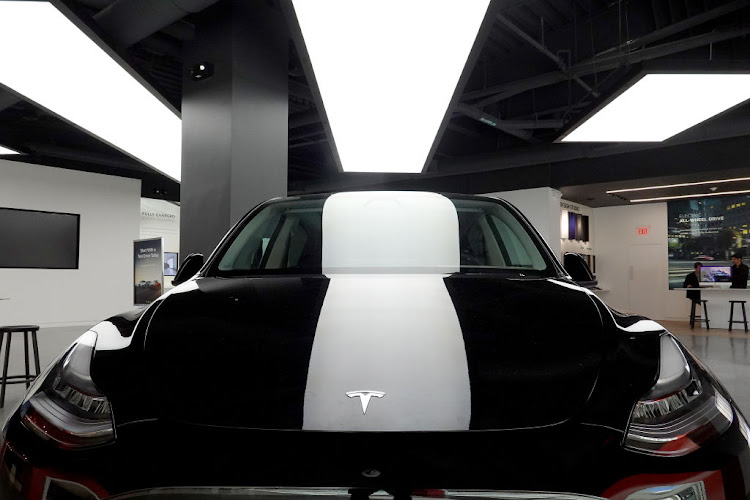 A Tesla Model Y is displayed in a showroom at the Miami Design District in Miami, Florida. The company's valuation hovers around $1.02-trillion (roughly R15,141,318,600,000).
Image: Joe Raedle/Getty Images

Tesla Inc has joined the trillion-dollar-valuation club as the member with the lowest revenue.

The electric vehicle (EV) maker’s shares have run past several milestones over the past few weeks amid a rush of positive news, including reaching a rarefied $1-trillion (roughly R14,845,930,000,000) in market value on Monday. That helped further bolster sentiment among investors, who are betting on Tesla’s potential for rapid future growth as EVs become mainstream and eventually replace fuel-driven cars.

However, unlike its trillion dollar peers, Tesla’s valuation touched that level before its revenue could reach the $50bm(roughly R742,296,500,000) mark.

Tesla shares’ substantial premium when compared to other technology firms at the time they crossed market valuation thresholds reflects greater investor enthusiasm for its technological dominance over peers, as well as an inflation of the S&P 500 Index’s market multiple, Morgan Stanley analyst Adam Jonas wrote in a note.

However, Jonas said Morgan Stanley clients also noted the company’s larger addressable market, and an opportunity to dominate the internet-of-cars market as other possible factors built into its valuation.

Tesla’s valuation milestone came as car rental company Hertz Global Holdings placed an order for 100,000 of its vehicles, a move that signals EVs are here to stay and gives bulls confidence that Tesla’s sky-high valuation is sustainable too.

“Wall Street is starting to believe the skyrocketing move with Tesla’s stock price is nowhere near over since Tesla has a massive lead in the EV space and improving growth potential as the US, European and Asian markets for electric cars grows,” Oanda analyst Edward Moya wrote in a note on Monday.

Tesla’s last annual revenue is considerably lower than that of Facebook’s, which entered the trillion club earlier this year before slipping back below that level. That also gives Tesla a very expensive price-to-sales multiple. The EV maker’s shares are trading at 21 times its sales, with the same ratio hovering at eight times for Facebook and estimated to be around six times for the NYSE FANG+ Index.

“Looking at current valuation multiples and market share for Tesla has been a loser’s game for years,” said Matt Weller, global head of market research at Forex.com & City Index. However, Weller noted that at some point, likely as more competition enters the market and interest rates start to rise, “investors will start to question whether the company will be able to deliver on its massive promises.”

Tesla Inc wants to shift to a less expensive battery for its electric vehicles, but first needs to figure out how to overcome political tensions to ...
Motoring
3 months ago