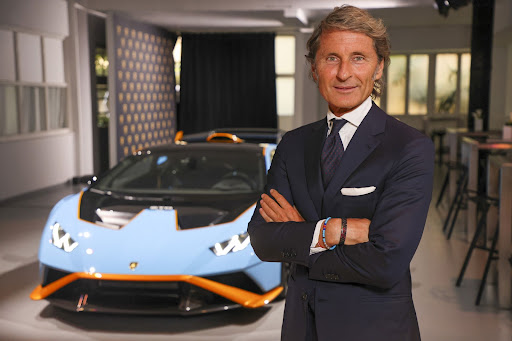 Lamborghini is gearing up for the final lap of combustion engines powering coveted models like the Aventador as the sports-car maker switches its lineup to plug-in hybrids.
Image: Bloomberg

Lamborghini is gearing up for the final lap of combustion engines powering coveted models such as the Aventador as the sports-car maker switches its line-up to plug-in hybrids.

The Volkswagen AG brand, with the track-focused Aventador, Huracan and Urus SUV models, will unveil its first production car with a plug next year before electrifying its full offering by 2024. For this year, Lamborghini has almost sold out its entire production run after record deliveries during 2021, according to CEO Stephan Winkelmann.

“It will be the last time that we only offer combustion engines,” Winkelmann said in an interview. The carmaker has seen a “very good start” to 2022, he said.

Lamborghini has allocated a record €1.5bn (roughly R25,924,150,000) for the shift to plug-in hybrids and plans to offer a purely battery-powered model during the second half of the decade. While supercar brands such as Ferrari NV and Aston Martin Lagonda Global Holdings Plc face an especially delicate task preserving brand identity in the costly shift to electrification, Lamborghini’s future plans are underpinned by VW’s record spending on new technology.

The manufacturer is working on a final design for its first electric car and is leaning towards a four-door model suited for daily use, Winkelmann said.

Lamborghini is set for earnings before interest and tax margins approaching 20% for 2021, according to an investor presentation. That compares to returns of just over 25% during the first nine months of last year for Ferrari. Full-year earnings, due to be reported in March, should be “in a range that surprises everyone,” he said. “Surprising to everyone in a positive sense.”

Group Lotus Plc and Britishvolt Ltd have signed a preliminary agreement to explore teaming up on battery manufacturing, research and development, ...
Motoring
6 months ago

A five-door Suzuki Jimny doesn't exist. Though having said this the Japanese carmaker does have plans to bring one to market in the not-too-distant ...
Motoring
6 months ago