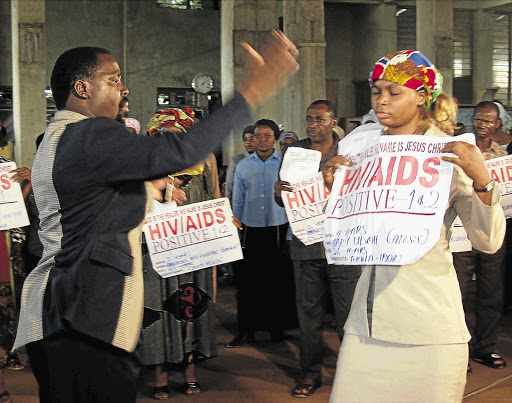 From prophesying the death of Michael Jackson in 2010, to the tsunami in Japan last year and most recently Zambia's victory in the African Cup of Nations, TB Joshua, born Temitope Balogun Joshua, has risen to world stardom. His renown is bolstered by the humanitarian work done by his Synagogue Church of all Nations (SCOAN).

Yet in Zimbabwe, TB Joshua has been an enfant terrible for President Robert Mugabe's Zanu-PF party, which has reeled under several unfavourable prophecies.

The most recent was a prophecy given by Joshua of the death of an old African leader in two months, due to a long-time illness.

"I'm seeing a head of state, by that I mean a president. He is not feeling well. He is very old. What is this I'm seeing ... sudden death.

"I'm seeing the death of an old African president in two months," Joshua said, during a service at the SCOAN.

The rumour mill has now been on fire in Zimbabwe, with Mugabe firmly under the spotlight because of his four-year-old battle with prostate cancer, which WikiLeaks disclosures last year claimed had "mestasised".

Mugabe turned 88 last month. Speculation has reached such riveting levels with Zimbabweans anxiously looking to April 16, thought to be when the two-month-old deadline given by Joshua ends - although the Nigerian prophet did not mention either the country or its leader.

But this has not stopped the likes of Mercy Ncube, 46, a mother of three, marking April 16 on her calendar - making preparations for the worst.

"I don't have anything planned for the Easter holidays this year, except to go to church.

"But I will be looking to see what will happen on the 16th of April because TB Joshua said something big would happen," Ncube said.

However, Zanu-PF hawks have dismissed TB Joshua's prophecy, adamant that their 88-year-old leader was fit as a fiddle and ready for elections.

Rugare Gumbo, the Zanu-PF spokesperson said: "It goes against tradition. You do not talk about such things. It is taboo. I do not believe in these prophecies, visions and dreams".

But, critics argue, Zanu-PF was not being genuine in its dealings with TB Joshua, given that the party had once believed the infamous diesel n'anga Rotina Mavhunga, who duped senior Zanu-PF officials into believing that diesel flowed from a rock in Chinhoyi.

"They do believe in TB Joshua's work, if they didn't why would loyalists such as Oppah Muchinguri, Kembo Mohadi and Tracey Mutinhiri have flocked to Nigeria.

"The reality is one can't separate spirituality and politics, and African leaders hinge on getting support from African spiritual leaders. Zanu-PF is no different," a political analyst at the International Crisis Group, who could not comment officially, said.