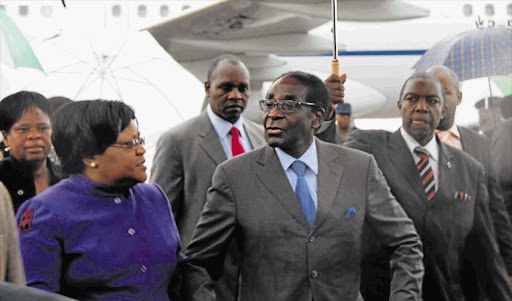 BACK HOME: President Robert Mugabe, 88, chats with Vice-president Joyce Mujuru upon his arrival at Harare International airport from Singapore on Thursday, following a two-week absence, which sparked reports that he was battling for his life in a hospital in the city-state

President Robert Mugabe returned home on Thursday from Singapore amid a storm of speculation about his health, and intensifying anxieties about what will happen if he dies.

Mugabe had left for far-flung Singapore - to which he spent the better part of last year shuttling to and fro for medical reasons - about a fortnight ago, but ended being a subject of ill-health reports as stories about why he was away for so long dominated news pages around the world.

While the online publication which initiated the reports later admitted they were unfounded, the hype about it had already reached alarming levels.

This took place against a backdrop of controversial Nigerian televangelist and faith healer Temitope Balogun Joshua's prophecy that an African leader would die by last week.

Cynics speculated that the evangelist - popularly known as TB Joshua - was referring to Mugabe before the death of Malawian president Bingu wa Mutharika was announced.

Mugabe's diehards reacted angrily to the prophecy before escalating attacks on him this week. Zanu-PF politburo member and former information minister, Jonathan Moyo, described Joshua as a "false prophet".

He even insinuated that Joshua was complicit in Wa Mutharika's death.

"TB Joshua's involvement in this tragedy smacks more of a plot than a prophecy. One thing for sure is that there is no prophecy here but just a prediction, if one is to give him a benefit of doubt. This leaves open the question as to what happened, because to neutral people there appears to be more to the saga than meets the eye," Moyo said.

Moyo, currently fighting in Mugabe's corner amid an escalating succession battle within Zanu-PF, said the Nigerian prophet was a fraud.

While Mugabe was away and the rumour mill was sounding the alarm about his health, political skirmishes over succession were raging within Zanu-PF, especially after the stories claimed Defence Minister and politburo heavyweight Emmerson Mnangagwa was going to succeed Mugabe.

Mnangagwa and Vice-president Joyce Mujuru are fighting a pitched battle to take over from Mugabe.

Their power struggle recently heightened during district coordinating committee elections in which Mnangagwa seemed to have gained the upper hand over Mujuru, who has been weakened by the death of her husband, former army commander General Solomon Mujuru, in a blaze at his farm last August.

Many within the Mujuru faction believe the general was killed by internal rivals as the succession race scaled to cutthroat levels. Zanu-PF has a long history of internal fights and murders linked to power struggles.

While the debate rumbled on, Mnangagwa was prominently touted as the potential successor ahead of Mujuru, seen as weak and indecisive.

However, that triggered angry reactions from within the party.

Zanu-PF secretary for administration, Didymus Muta-sa, effectively fifth in the party hierarchy, took unprecedented steps to attack Mnangagwa over claims he was going to succeed Mugabe.

Mutasa, more aligned to the Mujuru faction, provided the clearest indication yet that if Mugabe goes there would be chaos when he took off the gloves and unexpectedly pounced on Mnangagwa over the succession issue.

"We have a hierarchy that we follow as a party; Mai [Joyce] Mujuru is better placed (to succeed Mugabe) as well as [co-vice-president] John Nkomo and even [Simon Khaya] SK Moyo [party chairman]," Mutasa said.

"These are the people who can take over today. Whoever is funding this succession agenda has a wrong motive and should not be allowed to continue doing so." Mnangagwa, now recovering lost ground through a string of victories in the current district elections, tried to wrestle power from Mugabe in 2004 but burnt his fingers when his plot backfired.

Mugabe reacted with a fierce backlash, accusing Mnangagwa, his long-time ally, of plotting a "palace coup" against him.

A number of Mnangagwa's allies, including Jonathan Moyo, who has apparently abandoned the camp, were part of high- profile casualties following the failed coup.

Mnangagwa's failure, engineered by the late General Mujuru, resulted in a stroke of luck for Joyce Mujuru, allowing her to rise to her current position with Mugabe's support.

Mugabe even went to the extent of insinuating at the 2004 Zanu-PF congress that she was going to succeed him - before they fell out a few years later as the Mujuru faction started pushing for the veteran leader's retirement.

Only two weeks ago, SK Moyo and bigwig Obert Mpofu clashed over the succession issue at a politburo meeting.

There are also duels raging in Mashonaland East, where provincial chairman Ray Kaukonde and his predecessor, Paddy Zhanda, are at each other's throats over succession.

In Mashonaland West, Zanu-PF political commissar Webster Shamu and Local Government Minister Ignatius Chombo seem to be losing their grip on the province after their candidates were routed during recent district elections.

Polls had to be abandoned in Manicaland after candidates aligned to Mutasa lost in Makoni and Chipinge districts.

Fights during the ongoing elections are fuelled by factionalism and succession.

Senior Zanu-PF officials have widely expressed their frustration with Mugabe and demanded behind the scenes that he must go.

In terms of the current constitution, if Mugabe becomes incapable of performing his duties by reason of mental or physical incapacity, he will cease to hold office if a joint committee of the Senate and House of Assembly so recommends.

Without taking into account amendment No19, which gave legal force to the Global Political Agreement (GPA) and unity government, if Mugabe dies, a new president would be elected through the parliamentary electoral college within 90 days for the remainder of his term.

The procedure of how that would be done is clearly defined.

This provision was changed through a 2007 constitutional amendment No18 drafted apparently with the possibility of Mugabe's sudden death and succession in mind.

However, in terms of constitutional amendment 19, which lasts as long as the GPA subsists, if Mugabe dies the law requires simply that a Zanu-PF nominee is appointed president without further ado, although it is procedurally ambiguous on how the candidate comes into office.

Such an ambiguous provision of the law could force an already messy succession fight to deteriorate into a chaotic conflict, with disastrous consequences for Zimbabwe.