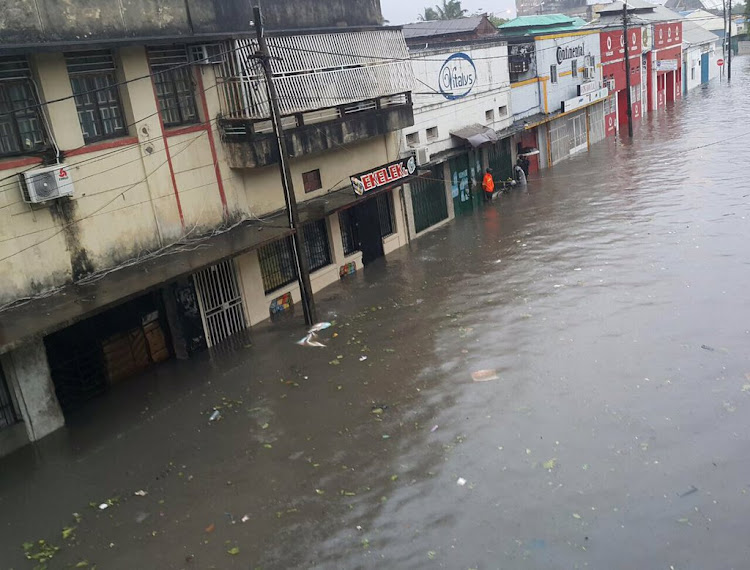 The streets of Beira in Mozambique after tropical storm Desmond made landfall on January 22. The country is now bracing itself for tropical cyclone Idai, which is due to make landfall on Thursday.
Image: Twitter/TinoMalinga

Residents in central Mozambique were on Thursday bracing for a tropical cyclone described as "extremely dangerous" by weather experts, with imminent landfall expected near the port city of Beira, which has a population of about 530,000 people.

"This storm has already triggered torrential rainfall that's led to over 100 fatalities in southern Malawi and Mozambique," according to Derek van Dam, reporting for CNN.

"Travelling at a speed of 11kmp/h, with sustained winds of 195kmp/h and gusting at 240kmp/h, she now is once again an extremely dangerous cyclone," said Storm Report.

It really does not look good for Beira in the coming days. First the winds and rain and surge from #Idai and then the river will flood. Hopefully people are evacuating to sturdy shelters on higher ground. https://t.co/R5735iSScy

Hurricane/Typhoon/Cyclone Alerts shared this on Facebook: "All people/friends in Mozambique from Inhassoro to Quelimane, are urged to prepare for intense cyclone conditions including torrential tropical squalls, life-threatening coastal and inland flooding and 185-220 kph winds and a 3-5 meter storm surge."

It advised residents to seek shelter or to evacuate in preparation for Cyclone Idai, which was due to make landfall on Thursday in Sofala province, near Beira.

When Mother Nature gets angry there's usually astonishing damage and a tragic number of lives lost.
News
2 years ago