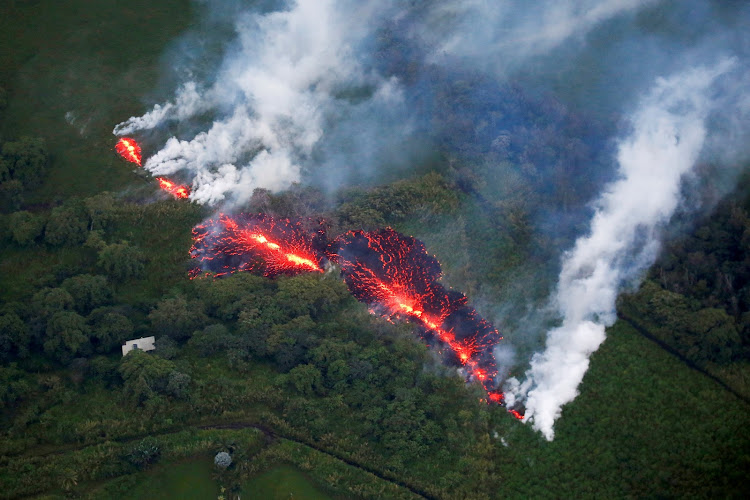 Lava erupts from a fissure east of the Leilani estates subdivision during ongoing eruptions of the Kilauea volcano in Hawaii, US, on May 13 2018.
Image: Reuters/Terray Sylvester

When Mother Nature gets angry there's usually astonishing damage and a tragic number of lives lost.

Here are 10 natural disasters that left chaos in their wake this year.

A powerful earthquake and tsunami devastated Palu city on Sulawesi, Indonesia, at the end of September, killing more than 2,000 people.

After the magnitude 7.5-quake and a subsequent tsunami destroyed large parts of Palu, there were around 5,000 people missing. Their bodies were thought to be buried underneath the wreckage, and the search and rescue operation was eventually called off.

Indonesia suffered earlier misery in August when an earthquake in Lombok killed at least 481 people.

Tens of thousands of homes, mosques and businesses across the island had been destroyed by the 6.9-magnitude quake on August 5.

A week before that quake, a tremor surged through the island and killed 17 people.

At the end of August a string of fresh tremors left at least 10 more people dead.

Record rainfall devastated parts of western and central Japan in July, with floods and landslides killing more than 220 people.

The torrential rain unleashed floods and landslides that destroyed large parts of neighbourhoods.

Japan's hardship continued in July when the floods were followed by a record-breaking heatwave.

Several dozen people died from heatstroke. In one week alone, at least 65 people passed away, while tens of thousands were hospitalised.

Tokyo governor Yuriko Koike compared it to "living in a sauna".

People fled to the sea to try and escape the flames as those reduced forests to ash and devoured buildings.

At least 88 people died when wildfires obliterated the mountain town of Paradise, California, in November.

The fires were described as the deadliest in the history of California.

The high death toll was partly due to the speed with which the flames spread, driven by strong winds and fuelled by drought-desiccated scrubs and trees.

The California fires in heartbreaking numbers

As the California fires rage on, the death toll continues to rise and as many 1,000 people are still missing.
News
3 years ago

In June, an eruption killed 194 people and swept away villages.

The eruptions forced thousands of residents to evacuate. Thick plumes of ash stretched for kilometres across the sky, while nearby towns were covered in a blanket of ash and volcanic rock.

In May, the eruption of the Kilauea Volcano on Hawaii's Big Island lasted weeks and destroyed hundreds of homes.

It is the most destructive volcanic eruption in the United States since the 1980 explosion of Mount St. Helens in Washington state.

The molten rock engulfed roughly 600 homes. Around 2,800 residents were forced to flee.

In addition to lava and toxic sulphur dioxide gas spewing from the volcano, explosions of ash created a health hazard to communities downwind.

Hurricanes Florence and Michael left a devastating toll in the Carolinas and the Florida panhandle.

In October, Michael decimated everything in its path from Panama City to Mexico Beach. The storm was linked with 60 deaths. It was the strongest hurricane on record to affect the Florida Panhandle.

Around 200 people died in flooding caused by heavy seasonal rains across 12 states in Nigeria in September.

Fears of a food shortage across the country rose after more than 120,000 hectares of farmland was damaged, with crops and livestock being lost.