Journalist is first person in Zimbabwe to die from Covid-19 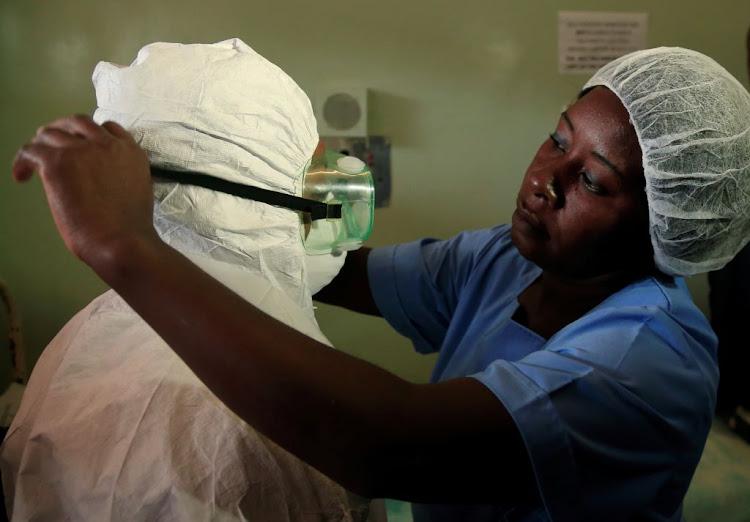 A health worker wears a protective suit during a demonstration of preparations for coronavirus cases at a hospital in Harare, on March 5 2020. A Zimbabwean journalist who recently travelled to the US and Tanzania is the country's first Covid-19 fatality.
Image: REUTERS/Philimon Bulawayo

Mtumwa Mawere, a friend of the Makamba family, broke the news on Twitter on Monday morning.

Donald Mujiri, public relations officer at the ministry of health and childcare, told TimesLIVE a detailed statement would be issued later.

Makamba died at the Wilkins Infectious Diseases hospital in Harare, the city’s only Covid-19 facility.

The journalist had travelled to New York on January 17. He went to the doctor on March 16 because he had a cough and fever.

After his return from his international visit, Makamba had engagements with various groups of people, socially and professionally.

Bank ABC, a leading Zimbabwean financial institution, in a statement identifying him as “second patient”, said he interacted with four of its staff members. Since the news broke, the bank had taken measures to manage the situation.

“All employees who interacted with the patient and their contact persons were immediately identified for further management. While none of the affected employees has shown any symptoms, preventive measures, which include 14 days of self-quarantine, as per health officials guidelines, have been activated,” said the bank's CEO Lance Mambondiani.

Makamba was the son of prominent telecommunications businessman James Makamba. He started his media career at ZiFM Stereo, where he hosted current affairs programmes.

A childhood friend of Makamba's told CNN he was suffering from a rare condition known as Myasthenia gravis, a chronic, neuromuscular illness, and had undergone surgery to remove a tumor from his chest last year.

Zimbabwe's first Covid-19 recorded case is recovering in her Victoria Falls home in self-isolation. Seven out of 18 people who came into contact with her are being closely monitored. Eleven of those contact are yet to be located, and so far none of those monitored have tested positive.

-This article was updated March 24, 2020 with the information as told to CNN that Makamba had a neuromuscular disease

A new 40km fence will be erected at the Beitbridge border post as one of the emergency measures that the government is implementing to mitigate the ...
Politics
1 year ago