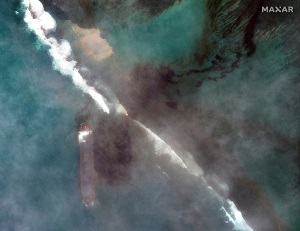 A satellite image shows the bulk carrier ship MV Wakashio and its oil spill after it ran aground off the southeast coast of Mauritius, August 7, 2020.
Image: Satellite image 2020 Maxar Technologies/via REUTERS.

A leak from fuel that spilt from a Japanese bulk carrier, that ran aground on a reef in Mauritius two weeks ago, has stopped.

The leak, according to Mauritius prime minister Pravind Jugnauth, stopped after 500 metric tonnes of heavy oil were pumped out of the stranded MV Wakashio’s breached tank.

The MV Wakashio, owned by the Nagashiki Shipping Company, struck the reef on Mauritius's southeast coast on July 25.

Environmental group Greenpeace said the spill was to likely to be one of the worst ecological crises that Mauritius had ever seen.

“Measures are being taken to secure the tank’s remaining 800 metric tonnes of oil. Five hundred and twenty five metric tonnes have already been transferred to a more secure location,” Jugnauth said in a statement released by the Mauritius Tourism Promotion Authority.

"Of the oil already spilled into the lagoons, 170 metric tonnes, including 80 metric tonnes of waste sludge, were skimmed off as at Sunday afternoon.”

“Weather conditions deteriorated on Sunday, interrupting pumping operations. It will only be possible to resume pumping when weather conditions improve, which is forecast to be this evening [Monday],” the prime minister said.

“According to the Salvage Master, the condition of the ship is deteriorating with hull cracks extending and new cracks appearing. There is now a real risk of the ship breaking in two. Tugs have already been positioned to take a part of the ship out to high seas, should the need arise.”

He said four skimmers were in operation, with one more expected to arrive from Rodrigues Island on Monday to skim the spillage.

Jugnauth expressed appreciation to all the countries that responded to Mauritius’s calls for help.

He reiterated that the safety of people remained the top priority and urged that volunteers wear personal protective equipment before partaking in any of the clean-up operations currently under way.

Fuel spilling from a Japanese bulk carrier that ran aground on a reef in Mauritius two weeks ago is creating an ecological disaster, endangering ...
News
1 year ago