Meet the woman driving a motorbike taxi in eastern Congo 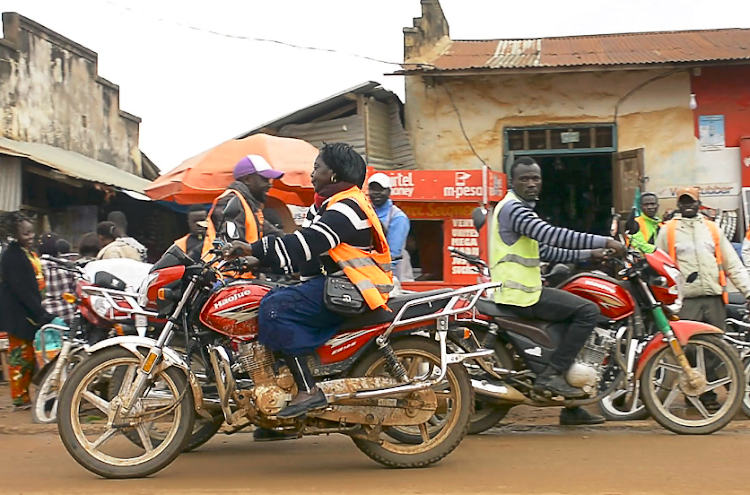 Congolese motorbike taxi rider Imelda Mmambu rides her motorbike as she waits for potential clients along the streets of Beni, in eastern Democratic Republic of Congo on August 31 2020.
Image: REUTERS/Erikas Mwisi Kambale

Wearing leather leggings under her dress, Imelda Mbambu weaves her motorcycle taxi through the city of Beni in north east Congo, a handbag slung across her side and a happy customer perched on the back.

Once a farmer, it was the death of Mbambu's husband ten years ago that forced her to find a new way to support her six children in a city where the majority of people live in extreme poverty on less than $1.90 a day.

She sank her savings into a red motorbike, known locally as a "boda", and hit the road.

Decades of unrest, including a civil war that ended in 2003 and an ongoing Islamist insurgency, has made violence against women commonplace in the east of the Democratic Republic of Congo, ranked one of the 10 most dangerous countries to be a woman by a Thomson Reuters Foundation poll in 2018.

According to the United Nations, documented cases of sexual violence in the east of the country rose 34% last year.

The novelty of a woman riding a motorbike taxi has won Mbambu loyal clients, but also saved her life.

"One time I was riding from the countryside when I was ambushed by bandits," Mbambu said.

"They were dressed in red blood-stained clothes and wanted to harm me, but when they noticed that I was a woman on a motorbike, they got very surprised and urged me to go on with my journey."

Since launching her business, Mbambu has picked up a number of regulars, with many women preferring her services to take them to and from the market.

Now her children never go to sleep hungry, she said.

"My mum’s job helps us get food, education, clothes, medicine and a lot more," said her daughter Neema Mandefu.