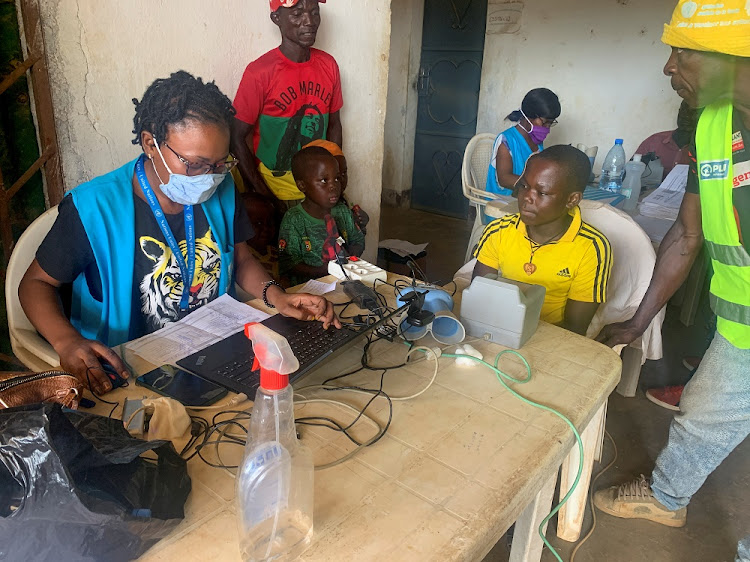 A boy who fled the violent rebellion in Central African Republic (CAR) is being enrolled and identified by an UNHCR officer in the border town of Garoua Boulai, Cameroon January 7, 2021. Picture taken January 7, 2021.
Image: REUTERS/Joel Kouam

More than 200,000 people have fled fighting in the Central African Republic (CAR) since violence erupted over a December election result, the UN refugee agency (UNHCR) said on Friday, with nearly half crossing into the Democratic Republic of the Congo.

The CAR army, backed by UN, Russian and Rwandan troops, has been battling rebels seeking to overturn a December 27 vote in which President Faustin-Archange Touadera was declared the winner.

“Refugees have told UNHCR that they fled in panic when they heard gun shots, leaving their belongings behind,” spokesperson Boris Cheshirkov told journalists in Geneva.

The nation of nearly five million people, larger than mainland France, Belgium and Luxembourg combined and rich in diamonds, timber and gold, has struggled to find stability since a 2013 rebellion ousted former president Francois Bozize.

The current fighting between a coalition of militias on the one side and the national army and its backers on the other was sparked by a Constitutional Court decision to bar Bozize's candidacy in the December  27 presidential election.

Former prime minister Martin Ziguele, who came third in the December  27 election, said on Friday there was fighting across the country every day, preventing movement between towns, and pushing more people to flee.

“Everyone is focused on the main transport route between the capital and eastern Cameroon for supplies, but inside the country, there is no movement,” Ziguele told Reuters by phone from Bangui.

“I cannot leave Bangui and go 90km (60 miles) without a heavily-armed army escort. Imagine then the population. Add the curfew and the state of emergency, it is really an apocalyptic situation,” Ziguele said.

In a statement on Friday, the International Conference on the Great Lakes Region, a regional body of 12 member states, called for a ceasefire and urged armed groups to “disengage from the encirclement of Bangui” and allow people and goods to move freely.

The body will also ask the United Nations Security Council to lift an arms embargo imposed on CAR that has restricted the flow of weapons to the army since 2013.

About 92,000 refugees have reached DRC and more than 13,000 have crossed into Cameroon, Chad and the Republic of Congo. The rest are displaced inside the Central African Republic, the UNHCR said.

Ongoing attacks have hampered humanitarian access, the main road used to bring supplies has been forced to shut inside the country, and many are now facing “dire conditions”, UNHCR's Cheshirkov said.

Some of the displaced are so desperate they have agreed to sex in return for food, he added. Malaria, respiratory tract infections, and diarrhoea have become common.

He also voiced concern about the reported presence of armed groups in the Batangafo and Bria camps for the displaced.

“Those armed groups are trying in some cases to restrict movements and in some cases forcibly recruit. So this is a very concerning situation,” he told the briefing.

Ziguele said that while a substantial increase in peacekeepers, as requested by the UN envoy in Bangui, was welcomed, a dialogue between all parties was urgently needed.

“A military surge is not the only solution to tackle the security, humanitarian and economic crisis that is threatening to put one of the world's least developed countries into a complete coma,” he said.