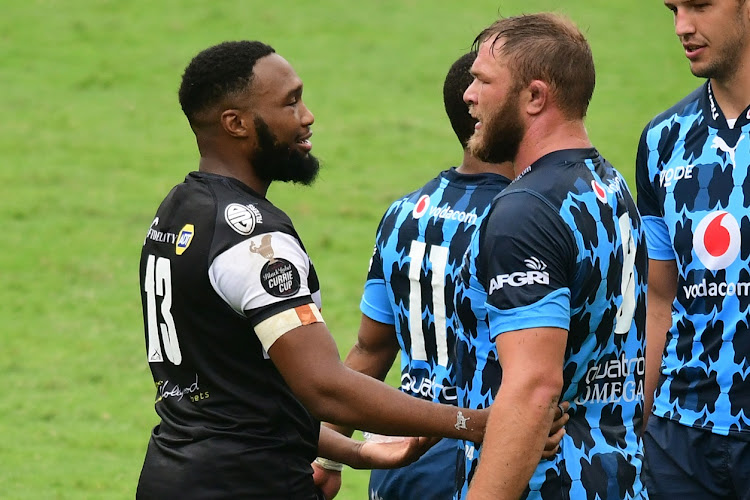 The Sharks' Lukhanyo Am shakes hands with Duane Vermeulen of the Bulls in their Currie Cup match at Kings Park in Durban on December 12.
Image: Photo by Darren Stewart/Gallo Images

Five key areas and matchups that may determine the result of Saturday’s Currie Cup final between the Blue Bulls and the Sharks at Loftus Versfeld (kickoff 3pm):

The Bulls have made their presence felt at the breakdown and the collisions in general this season. It helped set them apart in Super Rugby Unlocked and it paved the way for their passage to the Currie Cup final.

Apart from having a proficient ball pilferer like Marco van Staden in their ranks, their mentor Jake White is a proponent of bossing the collision as a means of exacting turnovers. He has always had Samson-like figures in his back row and you can expect the Bulls to bring a hard edge to their play in the collision.

The breakdown is however an area in which the Sharks have made headway this season. Under their previous coach their defence was happy to fan out and make the next tackle in the hope of frustrating the opposition into error. Under coach Sean Everitt, however, they are more combative at the breakdown with dedicated jackals in attendance.

Back of the scrum

Duane Vermeulen brings an uncompromising disposition, a hulking frame, a ton of experience and a self-assured swagger to the back of the Bulls scrum. White earlier this week spoke of Vermeulen’s value as captain and it must be deeply reassuring to have a player of his ability and belief to marshal the troops. Vermeulen plays to a certain standard and very rarely deviates from it.

Sharks’ No. 8 Sikhumbuzo Notshe is a player yet to reach his full potential but that he possesses vast ability is beyond doubt. He never quite realised his rich promise in Cape Town but he has revelled in the freedom the Sharks have afforded him off the back of the scrum.

Despite his considerable frame he brings a well-honed skill-set all round the park. It is his ability to seamlessly link with the backs that makes him a player hard to keep in check.

Much like the battle of the No. 8s the Bulls possess a sure thing, while the Sharks have a talent of which the ceiling is yet to be determined. Most coaches would be happy to have a player of Morne Steyn’s proven ability for a big final. Steyn has been around the block and few player possess his calm temperament for when the battle heats up. He is reliable and if he does put a foot wrong it hardly leads to catastrophe.

In Curwin Bosch the Sharks have one of the most naturally gifted players of his generation. He is slowly bringing consistency to his performances and already the benefits of working with kicking coach Pat Lambie are becoming apparent.

If flyhalves routinely keep raising the flags it may come down to whose tactical kicks hit the spot at Loftus.

Without Stedman Gans who is still sidelined with a hamstring injury the Bulls will go into battle with inexperienced outside centre Marco Jansen van Vuren. Many will consider the move a gamble as Jansen van Vuren has played the bulk of his rugby at scrumhalf.

Moreover, his direct opponent is Springboks centre Lukhanyo Am, who is hoping to add a Currie Cup winner’s medal to his Rugby World Cup gong.

Jansen van Vuren may not have the experience but has the physique, speed and sure pass to stand up to the challenge. Mind you, England expected the world of their outside centre Manu Tuilagi ahead of the 2019 RWC final.

The importance of the scrum is usually amplified in matches that matter and in a Currie Cup final ascendancy in that area is worth gold. Though the contest between Bulls loose head Lizo Gqoboka and Thomas du Toit attracts much attention it is the battle on the other side between home team tight head Trevor Nyakane and Ox Nche that may have a lasting impact.

Nyakane has a burgeoning reputation as one of the country’s most formidable scrummagers with few opponents able to boss him at close quarters. The less experienced Nche’s stock is, however, on the rise in the scrum, while his work rate and impact in general play may prove a tipping point at Loftus.

The Sharks may have named an unchanged 23 for the Currie Cup final but the role reversal of their scrumhalves is likely to invite scrutiny.
Sport
1 year ago

The Blue Bulls and the Sharks may not have the most enduring rivalry in Currie Cup finals but it has been one of raging intensity since sparks first ...
Sport
1 year ago