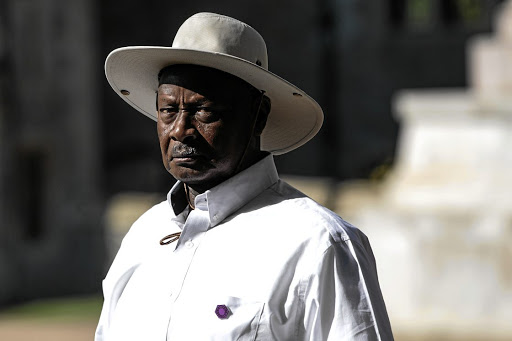 Museveni said in a televised address on Sunday night that a second wave gripping the country was "diffuse and sustained".
Image: Reuters

Uganda's President Yoweri Museveni on Sunday re-imposed a strict lockdown that included the closure of schools and the suspension of inter-district travel to help beat back a surge in Covid-19 cases in the East African country.

The new measures, which will be effective from Monday morning, include the closure of all educational institutions, some bans on travel, the shutdown of weekly open markets, and the suspension of church services.

Most of the new restrictions, Museveni said, would be implemented for 42 days. An assessment of their impact will then help the government decide whether to ease or prolong them, he added.

Uganda implemented one of Africa's tightest lockdowns at the beginning of the pandemic more than a year ago, but it was gradually lifted as cases slowed to a trickle.

Last month however infections started to spike and new cases, particularly among younger people, have surged, fuelling fears that the country could slip into an out-of-control second wave.

Museveni said in a televised address on Sunday night that a second wave gripping the country was "diffuse and sustained".

The government, he said, was worried the jump in cases would "exhaust the available bed space and oxygen supply in hospitals unless we constitute urgent public health measures".

"In this wave the intensity of severe and critically ill Covid-19 patients and death is higher than what we experienced in the first wave of the pandemic," he said.

Covid-19 infections in Uganda are on an average daily basis at their peak, with 825 new infections reported each day, according to a Reuters analysis.

From January to April the positivity rate in tested samples was mostly below 3% but the rate started climbing sharply last month, hitting 18% on June 2, according to Ministry of Health data.

The new restrictions potentially threaten to arrest an already fragile economic recovery from the blow inflicted by last year's lockdown.

Those restrictions contributed to a 1.1% economic contraction in 2020, but the finance ministry had projected before Sunday's new measures that growth would climb to between 4-5% in the fiscal year starting July.

From brick kilns to carpet factories, Covid-19 has pushed children as young as eight years old into dangerous and abusive jobs, rights groups said on ...
News
2 weeks ago

The unequal global distribution of Covid-19 vaccines could spur the trade in fake doses in Africa - a hotspot for counterfeit medicines, analysts ...
News
2 months ago