Toppled Conde failed to live up to pledges in Guinea 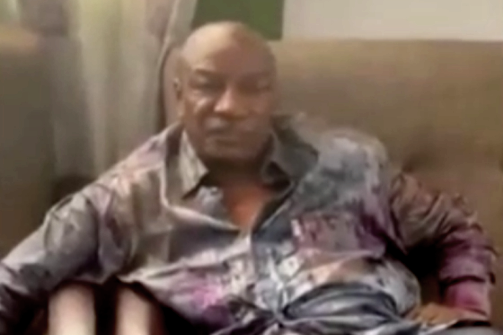 A screen grab from a video shared on social media, but not yet authenticated, claimed to show Guinea's President Alpha Conde detained by army special forces, in Conakry, Guinea September 5, 2021.
Image: Video obtained by Reuters on September 5, 2021.

The apparent overthrow of President Alpha Conde in Guinea capped a steady slide from grace for the veteran opposition leader and human rights professor whom critics say failed to live up to pledges to deliver democratic restoration and ethnic reconciliation.

It was not entirely clear what had precipitated the army's move on Sunday against the 83-year-old Conde. A special forces commander said in a televised address that “poverty and endemic corruption” had driven his troops to act.

The putsch came less than a year after a disputed election in which Conde won a third term after changing the constitution to allow himself to stand again.

For Conde's critics, the third-term bid was the final nail in the coffin of his claims to be “Guinea's Mandela” and risked chaos in the West African bauxite and iron ore producer.

Alioune Tine, an independent human rights expert for the United Nations and founder of the AfrikaJom Center think-tank, said Conde's refusal to cede power had made either a popular uprising or a coup inevitable.

“Alpha Conde is one of the politicians who worked over 40 years for democracy in Guinea. Once in power, he destroyed it,” Tine told Reuters.

At least two people were injured as heavy gunfire broke out near the presidential palace in Guinea's capital Conakry on Sunday morning.
News
11 months ago

Soldiers who staged an uprising in Guinea's capital on Sunday said in a short broadcast on state television that they have dissolved the constitution ...
News
11 months ago

“He put people in prison. He killed and he completely refused any political dialogue with the opposition.”

Conde has previously denied accusations of human rights abuses. Echoing other African leaders who have altered constitutions to hang onto power, he said he needed more time to realise his vision of a modern Guinea.

Dozens of people were killed in protests in late 2019 and early 2020 against a referendum to approve the new constitution, which passed easily due to an opposition boycott. Leaders of the protest movement were arrested.

The lead-up to the election last October was then marred by sporadic violence between members of Conde's Malinke ethnic group and his main rival Cellou Dalein Diallo's Peul. Conde was declared the winner with 59.5% of the vote.

Diallo disputed the results, though there was relatively little violence once they were certified.

The 2010 election of Conde, Guinea's most prominent champion of multiparty democracy, was greeted with optimism by human rights activists and international organisations.

Until then, Conde had been the chief critic of a succession of autocratic leaders: Ahmed Sekou Toure, who ruled from independence in 1958 until he died in 1984; Lansana Conte, who seized power in a coup after Toure's death; and Moussa Dadis Camara, who led a coup after Conte's death in 2008.

His advocacy earned him a death sentence under Toure, forcing him into exile in France, where he became an assistant professor of human rights at the Sorbonne.

He lost presidential elections to Conte in 1993 and 1998. In 1998, he was arrested on the eve of the vote, accused of plotting to overthrow the government and jailed for the next two years.

After the ruling junta agreed in 2010 to a democratic transition, Conde finally got his chance to stand in an open election and scored an upset victory over Diallo.

“I will try in my small way to be Guinea's Mandela and unite every son of Guinea,” he said in his inaugural address. “The restoration of social cohesion and national unity requires a collective look at our painful past.”

His government won early international praise for starting to reform the army, seeking to prosecute soldiers who committed rights violations, reforming the mining sector, and winning billions in debt relief.

But he encountered swift setbacks at home. Ethnic riots between Malinke and Peul broke out in 2012. Disaffected young people attacked an iron ore project run by Vale, causing millions of dollars in damage.

Faced with opposition protests and labour strikes, his security forces cracked down, drawing criticism from the United Nations and rights groups.

Then, the 2013-2016 Ebola outbreak killed more than 2,500 people in Guinea and dealt a multi-billion dollar hit to the economy.

Conde won re-election in 2015, but more turmoil followed as his opponents accused him of angling for a third term and started organising large street demonstrations.

His promises of reconciliation failed to materialise, with his critics instead accusing him of exploiting ethnic divisions to his political advantage.

“He really tried to play on the ethnic divisions, which split the Guinean population,” said Ryan Cummings, the director of the consultancy Signal Risk.

As news of his toppling was confirmed on Sunday, some rejoiced.

“It's a victory for the Guinean youth in general, we are really happy, we say well done to the Guinean army, to the special forces,” said Conakry resident Thierno Abdourahim Diallo.

“The youth have won, today we are free, everyone is free today.”