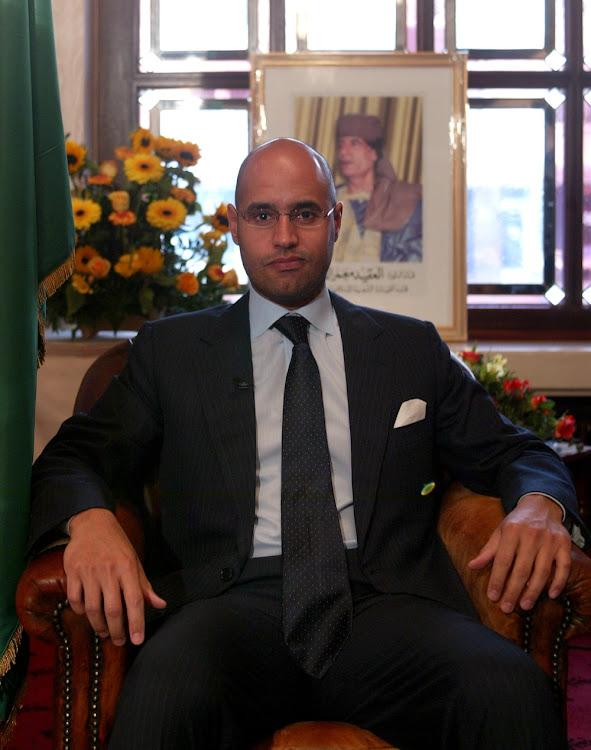 The son of Libya's late dictator Muammar Gaddafi appeared for nearly the first time in a decade on Sunday to register as a presidential candidate for a December vote planned to help end the years of chaos since his father was toppled.

Saif al-Islam al-Gaddafi, 49, appeared in an electoral commission video in traditional brown robe and turban, and with a grey beard and glasses, signing documents at the election centre in the southern town of Sebha.

Gaddafi is one of the most prominent — and controversial — figures expected to run for president, a list that also includes eastern military commander Khalifa Haftar, Prime Minister Abdulhamid al-Dbeibah and parliament speaker Aguila Saleh.

However, while his name is one of the best known in Libya, and though he once played a major role in shaping policy before the 2011 Nato-backed uprising that destroyed his family's regime, he has barely been seen for a decade.

His formal entry into an election whose rules are still contested by Libya's squabbling factions may also cast new questions over a contest that features candidates viewed in some regions as unacceptable.

The Libyan coastguard on Thursday fired on three Italian fishing boats, injuring the captain of one of the vessels, Italian authorities said.
News
8 months ago

Despite the public backing of most Libyan factions and foreign powers for elections on December 24, the vote remains in doubt as rival entities bicker over the rules and schedule.

A major conference in Paris on Friday agreed to sanction any who disrupt or prevent the vote, but with less than six weeks to go, there is still no agreement on rules to govern who should be able to run.

While Gaddafi is likely to play on nostalgia for the era before the 2011 Nato-backed uprising that swept his father from power and ushered in a decade of chaos and violence, analysts say he may not prove to be a front-runner.

The Gaddafi era is still remembered by many Libyans as one of harsh autocracy, while Saif al-Islam and other former regime figures have been out of power for so long they may find it difficult to mobilise as much support as major rivals.

Moammar al-Gadhafi was captured outside his hometown of Sirte by opposition fighters in October 2011 and summarily shot. Saif al-Islam was seized days later by fighters from the mountainous Zintan region as he tried to flee Libya for Niger.

Migrants in Libya fearful and angry after crackdown and killings

Hundreds of migrants and refugees waited outside a United Nations centre in Tripoli on Sunday to seek help in escaping Libya after what aid groups ...
News
3 months ago

Just over a decade later, Saif al-Islam is now something of a cipher for Libyans. The Zintan fighters kept him for years out of public sight and his views on the crisis are not known.

He gave an interview to the New York Times earlier this year, but has not yet made any public appearance speaking directly to Libyans.

Complicating his presidential ambitions, Gaddafi was tried in absentia in 2015 by a Tripoli court at which he appeared via video link from Zintan, and which sentenced him to death for war crimes including killing protesters during the 2011 revolt.

He would likely face arrest or other dangers if he appeared publicly in the capital Tripoli. He is also wanted by the International Criminal Court.

Educated at the London School of Economics and a fluent English speaker, Saif al-Islam was once seen by many governments as the acceptable, Western-friendly face of Libya, and a possible heir apparent.

But when a rebellion broke out in 2011 against Muammar Gaddafi's long rule, Saif al-Islam immediately chose family and clan loyalties over his many friendships in the West, telling Reuters television: “We fight here in Libya; we die here in Libya”.

At least 43 migrants drowned in a shipwreck off Tunisia as they tried to cross the Mediterranean from Libya to Italy, while another 84 were rescued, ...
News
6 months ago

Egypt’s Sisi opens naval base close to border with Libya

'If Libya is hell and Europe is heaven, this is purgatory': Life inside Covid-19 quarantine ship

Journalist Ian Urbina volunteered with the Red Cross in order to spend time on one of the Covid-19 quarantine ships moored off the coast of Italy. ...
Opinion & Analysis
7 months ago