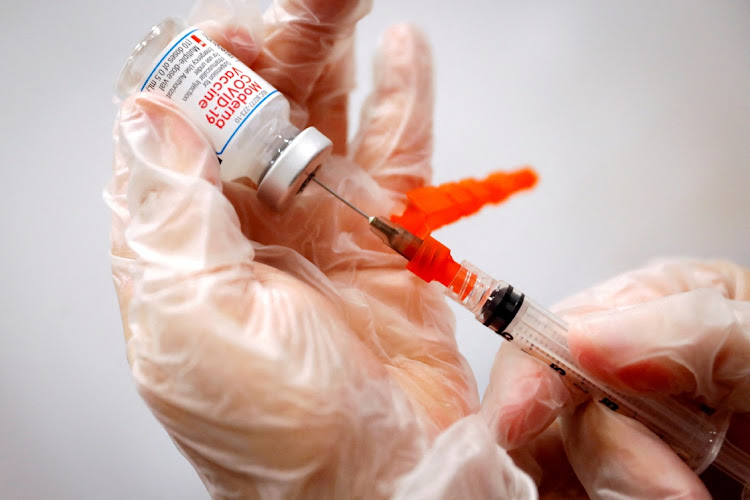 Moderna Inc has applied for patents in SA relating to its Covid-19 vaccine, prompting fears the company could eventually seek to prevent a new African vaccine manufacturing hub from making its own version of the mRNA shot.

Moderna spokesperson Colleen Hussey confirmed it had filed for patents “related to both the Covid-19 vaccine and Moderna's platform technology” in SA and elsewhere, after a group of 60 African-based charities raised concerns about them, but said the move would not block vaccine distribution in Africa.

She reiterated Moderna's October 2020 pledge not to enforce its Covid-19 related patents during the coronavirus pandemic.

But SA's Afrigen Biologics, which used the publicly available sequence of Moderna's vaccine to make its own version of the vaccine, said it had received no communication from the company about the patent filings.

It plans to start making and distributing across Africa in November.

Responding to a query if the company would enforce patents in Africa at the end of the pandemic, CEO Stéphane Bancel told Reuters, “We have not decided yet for low- and middle-income countries.”

The charities fear it will enforce them when Covid-19 is declared endemic, Tian Johnson, founder of the African Alliance, said in a joint statement.

This “would effectively derail all work the World Health Organisation and African scientists have put into building vaccine manufacturing capacity on the continent,” he added.

The Africa vaccine hub has WHO backing, as part of a pilot project to give poor and middle-income countries the know-how to make Covid-19 vaccines.

“Moderna is committed to ... equitable access to vaccines and can confirm that its intellectual property will not create a barrier to Covid vaccine distribution in AMC-92 countries by Afrigen Biologics either now or in the future,” Hussey said.

But Afrigen CEO Petro Terblanche told Reuters in a text message, “We have had no communication from Moderna ... We (would) ... truly value their collaboration.”

“There are patents filed in SA and other low-and-middle income countries by Moderna that, unless those are revoked, or voluntary licenses are awarded or Moderna will waive it, it will impact on our freedom to operate,” she added.

On Wednesday, BioNTech's co-founder and top executive told Reuters the vaccine maker had no plans to enforce its intellectual property rights should groups in Africa seek to make unauthorised versions of its shot.

For much of the pandemic, wealthy countries monopolised most of the global supplies of vaccines, leaving Africa massively under-vaccinated, with just one in ten Africans immunised.