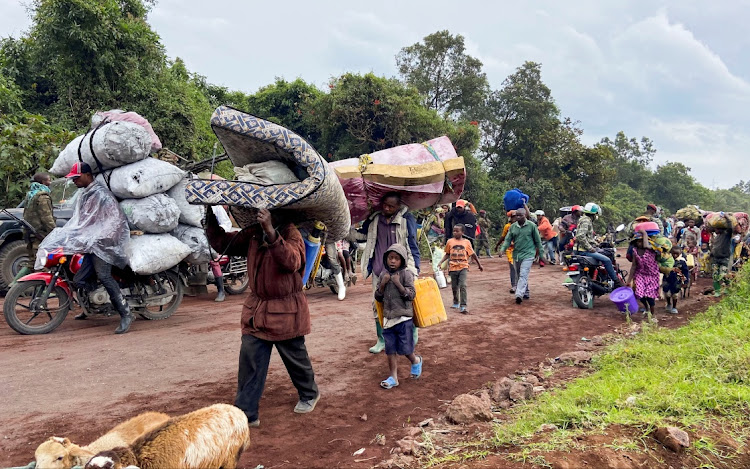 Congolese civilians carry their belongings as they flee near the Congolese border with Rwanda after fightings broke out in Kibumba, outside Goma in the North Kivu province of the Democratic Republic of Congo, May 24, 2022.
Image: REUTERS/Djaffar Sabiti

Fighting in eastern Democratic Republic of the Congo over the past week between the army and M23 rebel group has forced more than 72,000 people from their homes, the United Nations said on Friday.

The M23, a rebellion claiming to represent the interests of ethnic Tutsis in eastern Congo, is staging its largest offensive since a 2012-2013 insurrection that captured vast swathes of the countryside.

There has been heavy fighting as near as 20km to eastern Congo's main city of Goma, and the rebels briefly captured the army's largest base in the area.

Of the 72,000 who have fled, about 7,000 reportedly crossed into neighbouring Uganda, the UN Refugee Agency said in a statement. Others have headed to Goma or taken shelter in sites built to house people fleeing a volcanic eruption last year.

Eastern Congo has experienced near constant conflict since 1996, when Rwanda and other neighbouring states invaded in pursuit of Hutu militiamen who had participated in the 1994 Rwandan genocide.

Congo has 5.6-million internally displaced people, the most in Africa, according to UN figures. There are at least 1.9-million in North Kivu, the province where the current fighting is taking place.